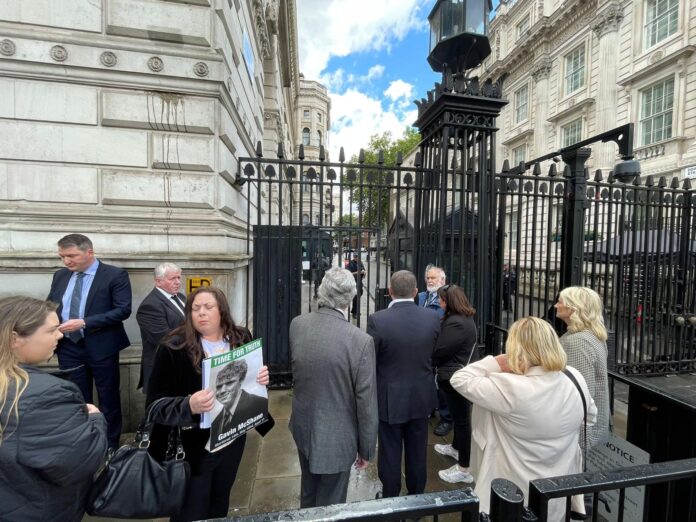 I write to you on behalf of Relatives for Justice, a human rights NGO working with victims and survivors of the recent conflict. Founded in 1991, our organization works with thousands of persons who have been bereaved and injured, affected by the most serious of human rights violations.

These families are directly impacted by your government’s “Legacy and Reconciliation Bill”.Our organization and members wish to protest against the very idea of this Bill in the strongest possible terms, and urge you to reconsider this course of action.

The failure to deal with the past, and address human rights violations has been a source of compounding trauma for families who have seen decades pass without the most basic of independent human rights compliant investigations or systems of accountability.

The Stormont House Agreement in 2014, to which your government was a signatory, was an encouraging signal that concrete measures would be established to meet the rights and needs of victims and survivors, and the obligations of the government to address those rights. Families’ hopes were raised that at last they might see some semblance of truth and justice.

Since then, however successive British governments have engaged in consistent bad faith, culminating in this “Legacy and Reconciliation Bill”. This Bill tramples over the enshrined rights of victims and survivors. It removes all commitment or access to independent investigations. It hands all power to a Secretary of State, who to date has demonstrated nothing except contempt for victims and survivors. It introduces amnesty measures that fly in the face of law and international human rights norms.

With this unilateral Bill your government has shown a reckless disregard for the rights of bereaved families across the entire community, the Good Friday Agreement, the judiciary, the rule of law and the administration of justice. To be clear if passed your government will have acted in direct contravention of the law, the Human Rights Act and the European Convention of Human Rights. After such a protracted period of time to be forced to engage with this disastrous approach compounds the hurt and trauma of victims in a totally callous manner.

Prime Minister this Bill is an affront to all modern standards of decency. Far from promoting reconciliation or healing, it will foster division and hurt. The criminal justice system is working effectively if left alone and without deliberate interference. Indeed it appears that this Bill has been introduced precisely because families can achieve positive outcomes through the current system.

The introduction of this Bill undermines confidence in the rule of law, something which 24 years after the Good Friday Agreement is unconscionable, and as a co-guarantor of that precious peace agreement your government must understand that this is nothing short of shameful. It is unsurprising that this Bill has no support among any section of victims and survivors.

Families have no confidence that this Bill will deliver any semblance of truth. Without independent investigation or legal compliance, families, who have experienced decades of the destruction of evidence, impunity of actors, and denial of experience, are astonished that they are asked to “trust” a process that lacks their engagement or consent and denies their legal standing.

This Bill usurps the powers of the North’s attorney general, the Lord Chief Justice and judiciary in an unprecedented political overreach by a western government into the criminal justice system, locking down the courts and administration of justice.

We urge you to overcome the zealotry of defense of the indefensible. While some veterans will be supportive of the abandonment of the rule of law, to cover up conflict crimes and protect the reputation of a small number of British army and RUC veterans, surely this is a step too far for any modern democracy, let alone a society trying to heal from conflict. This Bill has clearly been written to protect those guilty of the most serious of crimes, rather than protect the rights of those who suffered at their hands. This is a most egregious precedent. If passed your government will stand in the ignominious company of the most despotic and rogue of nations since the Second World War, relying on impunity and the denial of fundamental human rights. This self-serving Bill, designed to protect a handful of British soldiers denies the families of the 709 families of British soldiers killed in the conflict on these islands access to justice, if the Bill works to protect the impunity of a handful of veterans what of these families?

Mr Johnson, you have an opportunity to pull back from this catastrophic course of action. It is in your gift to return to the principles of Article 2 of the European Convention of Human Rights and the Good Friday Agreement. The Stormont House Agreement was sound in law and with minimal adjustment will have the universal support of all victims of the conflict on our islands.

While we value the opportunity of writing to you at this time, we would very much appreciate the opportunity to meet with you to explain our experiences of harm and conflict and why this Bill is so harmful. Meeting with families in person, from all backgrounds, affected by all actors to the conflict would take little of your time but will explain why this Bill is universally opposed by victims and survivors across the community and receives no consent.