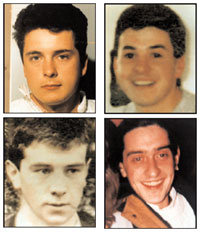 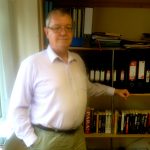 Peter Clancy, Kevin Barry O’Donnell, Sean O’Farrell and Patrick Vincent were summarily executed by the notorious secret killers of the British army (SAS) on Sunday 16th February 1992. They were young republicans who had just staged a largely symbolic attack on Coalisland RUC Barracks.  A heavy machine gun (it was a 12.7 mm Russian-made Degtyaryov anti-aircraft gun) mounted onto the back of a lorry, drove past the Barracks and fired at least 30 rounds at the building. Shots were also fired from hand-held weapons. While no-one could doubt the capacity of such a heavy machine gun against vulnerable targets any examination of the barracks’ defensive architecture would show that the attack had no chance of causing any major impact. No-one was injured, as the RUC expected this attack and had moved to the back of the barracks, and no return fire was engaged.

After staging this dramatic attack, the four young men drove to Clonoe Church to dismantle the weapon and disperse. Two other cars with getaway drivers were waiting there. It is clear from what has thus far been released into the public domain as a result of court hearings, that the movements and actions of the IRA unit had been anticipated for some time by the RUC and British army. They certainly had intelligence about the operation for the number of days required to assemble and prepare their ambush.

Waiting at the carpark were 12 covert operatives from the SAS and the 14th Intelligence Company. Papers indicate they had been there since 7pm, nearly four hours previously. As well as these 12 shooters, information gleaned from disclosure in other cases suggests that between the killers, the watchers, the co-ordinators and the decision-makers, British security personnel ensure overwhelming resources are available on such occasions and the targets have little chance of survival.

Even before the lorry had stopped, the firing started. Witnesses described it as sustained and devastating. 514 spent cartridges were recovered from the scene, all fired from British weapons. The IRA casualties had no chance to return fire or surrender. The two other men who were drivers of getaway cars waiting in the carpark were seriously injured; they were lucky they were not in the main line of fire. They were arrested, charged, pleaded guilty and received three-year suspended sentences.

One of these men, Aidan McKeever, won a civil case against the Ministry of Defence nearly 20 years later in 2011. In the course of his finding against the MoD, the judge described one of the soldier’s testimony as “utterly implausible”. This soldier claimed he thought that Mr McKeever was armed and about to shoot. He claimed that Mr McKeever, who was injured several times and whose car was hit by 15 bullets, adopted a firing position on the bonnet of his car.

This, the judge found to be “simply not credible”. “Soldier A tried to justify his account by referring to the fact that he didn’t know that [Mr McKeever] was unarmed but of course [Mr McKeever] knew that he was unarmed and it would have been insane for an unarmed man, whether wounded or not, to have presented himself in a way described by Soldier A. For [Mr McKeever] to have behaved in the way alleged by Soldier A was contrary to reason and instinct for self-preservation.”

Significantly, once Soldier A had given his evidence and had his story entirely disproved and discredited by Mr McKeever’s barrister, the other soldiers refused to go into the witness stand. Clearly, their accounts were also counterproductive. The allegation was that this was not an arrest operation as claimed by the MoD, but a shoot-to-kill ambush. By the soldiers’ silence, the court was able to draw an adverse inference against the MoD’s claim that the shooting was justified.

This month will be the 25th anniversary of this event. In common with many other cases where the state has staged ambushes and sought to cover-up its actions there has still not been an inquest. Nor has there been a proper investigation into the circumstances of the ambush. This case is one of the 50+ legacy inquests that the Lord Chief Justice plans to fast-track when agreed resources are released. It is cases such as these that Arlene Foster, the DUP and the British government prefer to keep out of the light as they expose the illegal actions of state forces during the conflict. In a properly constituted inquest, the killers can be made to attend and give their story, and the family will be given access to documentation which is currently unavailable.

In this case there was a clear political, policing and military decision not to effect safe and secure arrest and for due process to take place. Instead the rule of law was deliberately set aside and four men were summarily executed. This is a clear violation of the rule of law by the very same agencies that claim to uphold the law. And it is this very issue, those decisions, which require examination within the inquest process. Accountability is key.

Along with the families, Relatives for Justice call on all parties and the British and Irish governments to release the monies as already agreed by way of the Stormont House Agreement. There is no reason for continuing delays in this and other inquests. It’s time for truth.

The full report on the assassinations can be read here: https://relativesforjustice.com/wp-content/uploads/2016/11/Clonoe-Report-LRes.pdf