It was great to see a strong contingent of Ulster people at the Pearl River meeting – counties Tyrone, Fermanagh and Armagh being strongly represented on Friday night.

A cousin of Sam Marshall, and friends of Rory and Gerard Cairns, made poignant and moving contributions to the very well attended meeting.

And it was great in that the exchanges were informed and insightful and enabled the wider audience to drill down into some of the complexity concerning the extent of duplicity on the part of the British and unionist leaders on legacy.

Tyrone people there were keen to hear about the Loughgall case and the current legal challenge by the families to the DUP/UK blockage of funding to the courts in order that inquests take place. And a briefing from Mairead Kelly prior to leaving Ireland proved useful.

And of course as mentioned in the previous blog Emmett Woods was there.

We headed up to Albany yesterday. I was delighted to be in the company of AOH National Board members Sean Pender, Jere Cole (Clara Reilly’s fav AOH guy) and the person who heads AOH NY State Freedom For All-Ireland Committee and organiser of this trip, Martin Galvin. 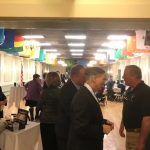 We met big Dan Dennehy, AOH National Director, halfway where we stopped for dinner at New Paltz, P&G’s, on his recommendation, which was spot on, and were captivated with his stories of the locality and of Irish America’s role down the years and centuries- of intervention in Ireland to right wrongs. Dan is a true raconteur.

With temperatures plummeting the further north we went you could feel the cold slowly rising from your feet into your legs. It awakened childhood memories of being in Canada in the cold, which was nice. Jere guided and navigated us safely there through hazardous conditions, a great guy he truly is.

But the welcome was warm at LAOH & AOH Albany, I’d big shoes to fill as last year the guest speaker was Fr. Gary Donneghan.

And AOH member Ciarán Geraghty was being honoured.

After a quick change we were piped into the main hall to a large and patient crowd by NY State President Vic Vogel in full attire.

I was delighted to see on display pictures of RFJ’s Remembering Quilt from visits by Albany LAOH & AOH to Belfast. Familiar faces of trips over the years to Ireland made the welcome all the more. 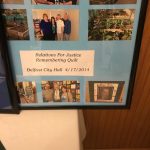 The reception here, like right across the NY State to our message, was heartening, uplifting and very encouraging. There’s an energy to do – to right wrongs – and to take a principled stand with ordinary Americans – Irish Americans – wanting to play their part.

And this has already begun.

We had set off for Albany from Congressman Joe Crowley’s office in Queens NYC.

Congressman Crowley more than willing to do whatever he can with other Congressional and Senate colleagues to address the rollback from agreements on legacy.

And hopefully we can get a Congressional Hearing in March on these matters and a delegation for a fact-finding visit too. Already the highly respected and influential Brehon Law Society has expressed an interest to RFJ in conducting such a visit as has the IAUC and of course the LAOH & AOH who are always on the ground back home – hence this visit.

So to Delores, John, Ray, Liam, Karen, and all at Albany LAOH & AOH a big go raibh maith agaibh. And to Jere who has been great, despite his wife Margie being ill for sometime now. Margie returns home from hospital this week, we wish her well.

PS – I was delighted to receive a jersey from the local GAA club in Albany, the Rebels! 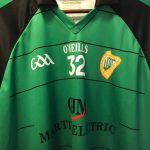