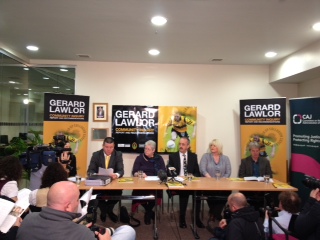 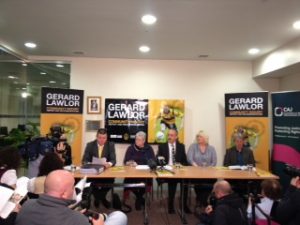 On behalf of the family and friends of Gerard Lawlor, I would like to welcome you all here this morning to present the findings of this report.   After 10 years of engagement with all of the agencies of the state who had responsibility for enquiring into the circumstances of Gerard’s murder, the family were frustrated and disappointed at the lack of progress, in spite of the evidential opportunities which were apparent.

The family approached our practice, KRW and Relatives for Justice earlier this year to consider a mechanism to draw all of the available information together and to present it publicly in an attempt to set out the facts for the record and to provide a forum to demand accountability from the state agencies who have responsibility for investigating the circumstances of Gerard’s murder.

We considered that the appropriate mechanism would be to convene a Community Inquiry.  The gravity of the issues raised by the case, transcended three different agencies of the State, the PSNI, the Inquest system and the office of the Police Ombudsman.  As such we carefully drafted Terms of Reference and then commissioned a panel of internationally respected human rights experts, jurists and academics, and I formally introduce them to you

•             Professor Bill Rolston, Director of the Transitional Justice Institute at the University of Ulster, Jordanstown, and

•             Gemma McKeown, Solicitor, the Committee on the Administration of Justice.

The Inquiry sat on the 10th anniversary of Gerard’s murder, at St Enda’s GAC in Glengormley where Gerard was a much valued and respected member.  The panel were able to hear from victims of other attempted murders in the hours prior to Gerard’s killing and was also provided with an expansive brief accounting for all of the available evidence and correspondence in the case, compiled over the years.

I am pleased and proud to advise that the panel have thoroughly examined all available material and have carefully considered all of the evidence presented at the Inquiry and have reported in strict adherence to the Terms of Reference.

I now propose to hand over to the Panel Chairperson, Jane Winter, who will set out the findings of the report as well as the recommendations that the panel consider appropriate for the relevant state agencies, but before I do so I have been asked on behalf of Gerard’s family to publicly express their appreciation to the Panel for the diligence and expertise in preparing this detailed report.  Gerard’s parents would also like to speak after Jane, and we will hope to deal with any queries or questions at the end.

Just after midnight on 22nd July 2002, Gerard Lawlor was shot dead by loyalists in Glengormley.  In the two hours before his murder loyalists had carried out four other attempted murders in north Belfast, following an attack on a Protestant man earlier that evening.  Despite an obvious pattern of violence, the recently-reformed PSNI took no preventative measures, and paid scant attention to the four previous attacks.  The police also ignored eyewitness evidence which came to their attention after the murder.

The Inquiry Panel heard from witnesses and carefully considered all the circumstances surrounding Gerard’s murder.  We found serious deficiencies in the various investigations that have taken place, which, in our view, add up to collusion, in that state agencies, including the PSNI and the Police Ombudsman have all failed so far to provide an effective investigation in accordance with Article 2 of the European Convention on  Human Rights, which protects the right to life.  These failings were compounded by the Coroner’s decision to exclude a crucial eyewitness and his ruling that Article 2 did not apply.  Such failures, while serious, would not necessarily amount to collusion on their own.  However, when such agencies wilfully refuse to look at the evidence before them holistically, or to make obvious connections, that can only be described as collusion.

Just after midnight on 22nd July 2002, Gerard Lawlor was returning home down the Floral Road in Glengormley having left the Bellevue Arms on the Antrim Road.  A motor scooter with two men on it pulled up and Gerard was shot three times. He died on the spot.  The murder was claimed first by the Red Hand Defenders, and later by the UDA/UFF.

Gerard Lawlor was the last Catholic civilian to be shot dead as a result of the Northern Ireland conflict.  His death was one of the first sectarian murders to be investigated by the PSNI, which assumed its powers the previous November.

The family of Gerard Lawlor suspect that informants were involved in this murder and have concerns about the failure of the PSNI to prevent this murder and properly investigate it. These serious concerns cumulatively raise the possibility of collusion in this murder and combined with the fact that it took place in 2002, after the Human Rights Act 1998 came into force, requires the state to carry out an investigation in compliance with Article 2 of the European Convention of Human Rights (ECHR).

On the tenth anniversary of this tragic murder, 22nd July 21012, a Community Inquiry was held at St Enda’s Gaelic Athletic Club, of which Gerard was a member and where he had been training on the afternoon before his death.

An anonymous witness, known as Witness X, told the PSNI she had seen two men burning a car and heard them boasting about Gerard Lawlor’s murder in Cave Hill Country par on the night of the murder.  The burnt out car was recovered, corroborating her evidence, but she was ignored.  The Coroner did not consider it necessary to take her evidence into account, but was ordered to do so after the High Court judicially reviewed his decision.

The opportunity to speak to you today is not one that we ever wanted.  This is not a position that any parent should find themselves in.  The last ten years have been cruel.  There isn’t a day that goes by that we don’t think about Gerard, he is always in our thoughts.

We will never get over the loss of our beautiful son.  He was a bright 19 year old boy on the threshold of his adult life.  He was our son and brother and he was also a father to his son Josh, who has grown up without the love of a father.

The pain of the grief of losing a child has been impossibly difficult.  It is a life experience that we have done our best to try to come to terms with but it is a situation which has been poisoned by the inability of the state to do their job right.  It has been a shocking experience to hear and see the information develop in front of our eyes, and to hear allegations of collusion, which are now proven by this report, and to begin to comprehend how the rights of the killers are more important than our sons right to life, because they are informers.  This cannot be right.

Our sons case is one where a witness came forward and told the police who did it.  Police will often appeal for the public’s help to bring people to justice, and that they can’t do their jobs unless the community comes forward, but this happened here.  Far from using this help to bring prosecutions they protected suspects from prosecutions.

This was all at a time when police was meant to be reformed, from an old corrupt institution to a new regime.  We always brought our children up to respect the police and the law, and to teach them right from wrong, but our experience has denied us the right to have confidence in the police.  Our eyes have been opened by the experience of our own life, and we wanted to bring the entire facts to the public’s attention in a hope that the old mindsets will change and the police investigations will become evidence led and prosecution focussed, as opposed to intelligence issues being of uppermost importance, which have conspired to rob us of the right to justice.

We are proud that our lawyers and all of the human rights organisations have come together to produce this report for the record, and we are deeply grateful to them, but these are lengths that we as a family should not have had to go to.   We hope that the different state agencies take notice and respect the recommendations made, because we don’t want to see another family sitting in our shoes.  We want to have confidence in the system but at the minute we have none.

SIGNIFICANT FINDINGS OF THE REPORT

1              Witness X had always maintained that she had provided the information anonymously by means of the confidential telephone line in the days after the murder.  Astonishingly, the Police Ombudsman’s report records that DI Clarke himself observed “that phone calls made to Crimestoppers in 2002 outside office hours, were answered by Belfast Regional Control, and were not logged or recorded for confidentiality reasons” .  Such a policy beggars belief and negates the whole purpose of setting up confidential police hotlines.

To this day, neither Man A or Man B has been arrested or questioned by the PSNI about the murder of Gerard Lawlor, nor have the police made any further contact with Witness X.

3              …the facts speak for themselves.  The failings we have noted constitute a pattern.  They were systemic.  They were repeated.  Victims of attempted murder were treated with disdain.  They were not taken seriously.  The PSNI did not bother to take statements from them while the incident was fresh in their minds; instead they were invited to come to a police station, the next day or it was left to their own initiative to approach the PSNI to pursue an investigation.  The police did not take any witness statements.  In consequence, they had no descriptions to circulate.  They did not treat any of the incidents as a crime scene. They made no effort to protect the scenes from contamination, and they made no effort to search for or retain forensic evidence.  They lifted not one finger to prevent an escalating series of attacks which culminated in a serious wounding and a murder.  By failing to look at the overall picture of what was happening that night, they failed to treat it for what it was, a loyalist rampage hell-bent on killing Catholics, or, to use the police’s own term, a major incident.

5              … when such agencies wilfully refuse to look at the evidence before them holistically, or to make obvious connections, that can only be described as collusion.      PAGE 39

The Inquiry Panel were:

•             Professor Bill Rolston, Director of the Transitional Justice Institute at the University of Ulster, Jordanstown, and

•             Gemma McKeown, Solicitor, the Committee on the Administration of Justice.

The terms of reference of the Community Inquiry were: