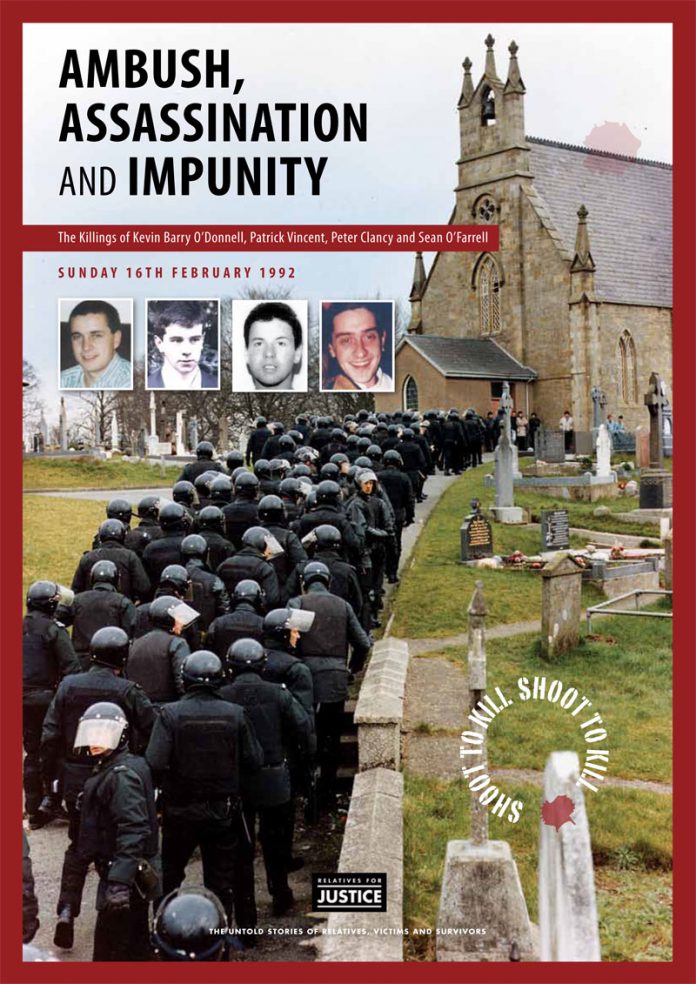 Mrs. Justice Keegan, the Presiding Coroner delivered an update today to families at the High Court regarding her recent review of the outstanding legacy inquests. Relatives for Justice had attended at the previous hearing. A link to our table providing a brief synopsis in each case can be found here: Legacy Inquest Schedule

Outlining which cases will be heard in Year 1, beginning in April 2020 and how the remaining cases will be managed to complete the Lord Chief Justice’s five year plan, Justice Keegan was at pains to point out that she understands some families will be disappointed with her decisions, and that they are not in the first year:

“Before I proceed, I would like to emphasise that, within the coronial system, no legacy inquest is more important or of greater priority than any other. I am conscious that each inquest concerns somebody’s loved one and that families have to live every day with their loss no matter when or how it occurred.”

Year 1 cases include the British Army shooting of Leo Norney on the Shepherds path in Turf Lodge in 1975, the SAS ambush of IRA members William Fleming and Daniel Doherty and the death of 10-year-old plastic bullet victim Stephen Geddis.

All cases which are not listed in Year 1, are to be split into two groups.

The first group are those which need to be “actively managed” by the judiciary to get them ready for hearing. Justice Keegan proposes to list these cases for review every 6 months, with the first review taking place in April 2020 so that she can decide what will be listed in Year 2. A dedicated person will be appointed.

The second group are cases where there are ongoing investigations, where the outcome would benefit the inquest proceedings. These will be dealt with “administratively” so no formal court hearings, but management through correspondence.

Some cases are to be linked thematically. The Armagh “Shoot-to-Kill” cases were referenced as already being linked. Given that these killings occured in 1982 and previous assurances have been given, this may well be a group of cases that families expected to have had a date set sooner rather than later. It was made clear at the previous preliminary hearing that the case is “not nearly ready” and the announcement of a fresh investigation into the Kinnego bombing, which has been allocated to Jon Boutcher and his team to investigate will be a factor in how quickly this case is ready for listing. That the state of readiness is ultimately in the State’s hands means that these families who have yet to see an inquest finalised have once again had their cases pushed back.

Two other groups were proposed, specifically Mid Ulster cases attributed to Loyalists between 1990 and 2000. and a group described as “cases where undercover soldiers were in situ prior to the fatal incident”.

It is particularly disappointing that the families who have not yet had inquests at all will not be prioritised, including the cases of four men killed in Clonoe.

“It’s more of the same old. We go to court and get our hopes raised and we are left with such a sense of hopelessness. We had hoped to be in year 1 but realised in the autumn it could be year 2. Now we don’t know when it will be at all. Too late for my husband/our father as he has advanced dementia. We feel so worn down by the system.

“We need our case to be heard separately. Heard as The Clonoe Case. After waiting 27 years we want our voice to be heard and not lost among other cases, just because it’s convenient for the state. The state shot Barry dead when he should and could have been arrested. It’s time for the truth.”

Equally it is disappointing that cases in which fresh inquests were announced nine, nearly ten years ago, including the killing of Francis Bradley and those of Gerard Slane and Terence McDaid are also without clear routes to a date being set. These cases are of upmost public interest and have been subject to decades of contest from the state.

While recognising that today marks important progress for ten families, that these other families do not have a clear timetable for having their inquests heard makes today disappointing. Especially as the “state of readiness” is in the hands of the state, which has deliberately obstructed these cases to date.

An annex of which cases are deemed to fall into each category is provided at the back of the Coroner’s statement available online: Inquest Schedule Statement by Justice Keegan Nov 2019