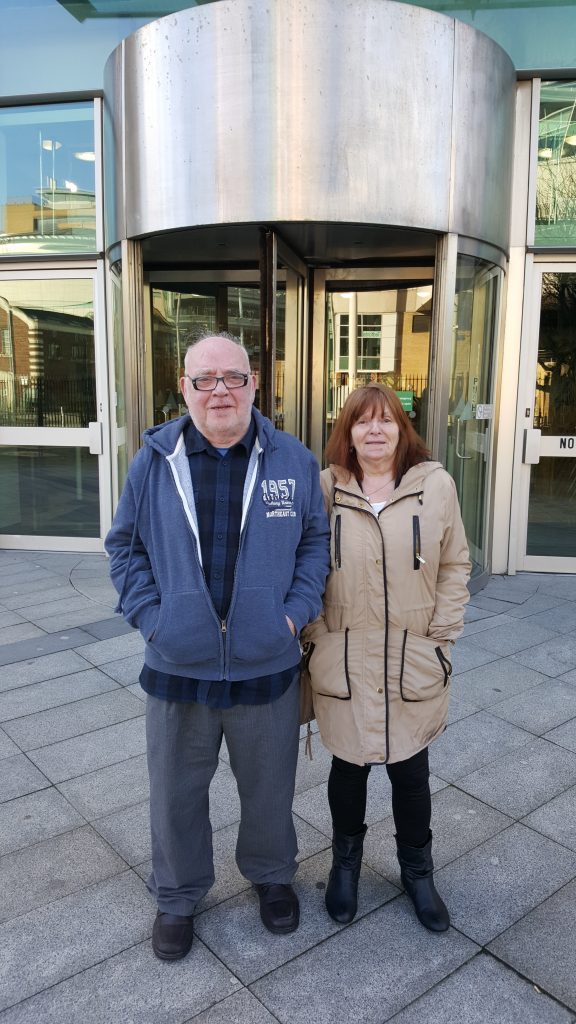 Expert pathologist Dr Cary – engaged by the Jordan family – was supposed to be on the stand. His flight from London was cancelled so he will be rescheduled. His testimony focuses on the family’s case that Pearse was shot in the back and therefore facing away from the killer, Sgt A, when he was shot.

It will be a short day today. Sgt A and officer M are being recalled to answer a single issue which has emerged from an intelligence document discovered to the family only last Friday. This contains the name of a suspect who, the family believe, may have been the real target on the day. The document was sent in to the operations room of the Tasking and Coordination Group the day Pearse was killed. The ops room was in overall command of the personnel involved in the surveillance that day. This document was in the room some two hours before the shooting.

Extraordinary, yet so true to form; the crucial documents are only being “discovered” so late in the day by the police!

In fact judge Horner wishes to have testimony from Dr Cary tomorrow and phonecalls are to be made to try and set this up. The issue is that the PSNI want their expert witness, Dr Pounder, to be present to hear Dr Cary’s testimony. If tomorrow is not possible, this will be postponed till after Easter.

The inquest will finalise with written submissions to the coroner, Judge Mark Horner. Oral submissions will now be postponed until after Easter. The coroner will then write up his narrative findings, incorporating his conclusions. Should he find that criminal offences may be suggested by the evidence, he is required to refer the matter to the Director of Public Prosecutions.

Later this morning, Sgt A will take the stand, having been recalled by the family. He will be hidden by a screen from public view. Pearse Jordan’s mother and father, however, can see him and judge his demeanour, as can all the lawyers. Teresa and Hugh Jordan have agreed not to describe screened witnesses or talk about how they conduct themselves in the witness box.

It is one of the sad facts of this society that there has been so little media coverage of this inquest. Only the Irish News has had consistent – though not complete – coverage. The killing of an unarmed man by a police officer in disputed circumstances should be followed through to the end. So many of the personnel involved in this case cut their teeth during the shoot-to-kill incidents in 1982. The same personnel were involved in a subsequent killing. These units need to monitored and held to account.

In fact Dr Cary cannot come tomorrow and, as Dr Pounder is required to be present for Dr Cary’s evidence we will have to come back in April for this final witness. Written submissions to be completed shortly thereafter. Oral submissions after the coroner has had a chance to consider written papers. Perhaps the last week of April with each party given an hour? The 22nd April beginning at 10am is set for final oral submissions.

On to the recalled witnesses …

Officer M is called to the stand and takes his oath. He is told of the new intelligence document generated on the day of the operation. It relates to another suspect linked to the car acting suspiciously near Whiterock leisure centre. This led to an intensification of surveillance and greater numbers on the ground.

M is given the “new” document – 7 pages long. He is asked not to mention any names. At 4.40pm on the 25th November 1992 a named person and an unknown male are moving material using a ford Orion car. M is asked whether this is what intensified matters. M says he has never seen this name before. He is referred to a name earlier in the document and asked to look at the context.

Counsel for Jordan family begins his questions to M. He refers to evidence from a previous witness, AA, the senior officer in the operations room. It relates to an individual who was subject to surveillance and counsel wants to ask whether the name in the new document correlates. AA said – during his evidence – that M would have to have been made aware of the name given his role as the HMSU liaison officer. M insists he was never given that name. Counsel puts it to him that this info would usually have been given to officers on the ground. M constructs an argument that the ops room was very busy and maybe AA neglected to pass the info on; perhaps it slipped his mind. M sticks to his story that he hasn’t seen the name.

Counsel can’t believe this. It was a small room, not much was happening according to the log, he’s sitting next to AA and yet the key name is not passed on? This is hard to credit.

M sticks to his story that he was not given the name.

This is the quartermaster of the local IRA linked to the car; he clearly is a person of interest but M is not told? Counsel suggests this is why the log was tampered with – in order to obscure this name – and this is the origin of the story about the wrong suspect being shot. M understands the point but disagrees.

The Coroner himself then puts it to M that it would be “grossly negligent” for the information about this suspect not to have been passed to him, a “dereliction of duty” which could have put his officers in danger. M agrees though he says he would not put it so strongly. Coroner puts it to M that he must be astounded to see this name now?

In RfJ’s view this is surely a significant development … !

Sgt A takes the stand and is sworn. The same new evidence is at issue. Counsel for the coroner takes A through this.

A avers, like M, that he was not given the name of the person in the newly discovered document on the day he shot and killed Pearse Jordan.

A does not know the name and has never seen it before. Counsel asks whether, given the information about this man, he seems” a person of interest”. A says it seems likely given the intelligence; as described by counsel – a potentially dangerous individual.

Counsel suggests that it would surely have been important for the unit on the ground to be aware if this person may have been driving the suspicious car. A says not necessarily.

Counsel for the family now asks his questions.

A, on the last occasion he was in the witness box, referred to a person with the same surname as the individual in the new document. A confirms this.

Counsel puts it to A that he’s the type of person who likes to keep abreast of significant IRA personnel in the area. A says no it wouldn’t have mattered to him who the target person is. No difference to him, he just dealt with the situation as it arose. “Sometimes you knew exactly who you were dealing with sometimes you didn’t.”

But, says counsel, Inspector M says had he been told this information the officers on the ground would need to know as they would need to have their guard up. A says it all depends on what happens; even if other people set a lot by names and reputations A is not bothered. He says: “I just takes it as it comes”.

Last time, counsel reminds A, it was put to him that he knew who the driver was and A denied it. Now counsel puts it to A – robustly – that he did indeed know who the driver was and that he thought it was the man mentioned in the new document. “You would want to go after the kind of terrorist who would shoot officers and throw bombs at them, wouldn’t you?”. A says the name means nothing to him. Counsel presses that this was like 1982 when A falsified an account of a killing. A of course denies this.

Counsel reminds A of his self-image as “the most highly-trained and experienced anti-terrorist firearms officer in Europe”. Surely having a man like the one whose name came into the ops room at 3pm as a target would bring a particular adrenalin to the occasion?

A, getting tetchy, denies again and says he will keep denying because he didn’t know this individual and that is the truth. Counsel, however, has made his point.

Counsel for the police recognises their story needs reaffirmation …

He asks only one question of A: did you recognise the driver when the car you were in drove up alongside Pearse Jordan’s car? Unsurprisingly A replies in the negative to this friendly question.

Once again the Coroner’s intervention is tellign …

Coroner asks A whether looking at the new name, he is surprised that he wasn’t given it on the day. A says no.

Coroner: “If this was relevant information why are you not surprised it was not handed down? One would have expected you to be warned: that you have to be careful as this man is dangerous at the very least”. A says not really.

The Coroner presses the point: “surely your superior officers failed if they did not supply the information to M as he would have wanted to pass it to you?” A agrees to that at least.

That concludes matters until after Easter …

It has been a significant morning with this new intelligence document appearing.  It seems to support the case that the absence of a simultaneous log for the earlier part of the afternoon is very suspicious. The issues of:

are now central to the conclusions of this important inquest.

Concern at use of Plastic Bullets – They must be Banned