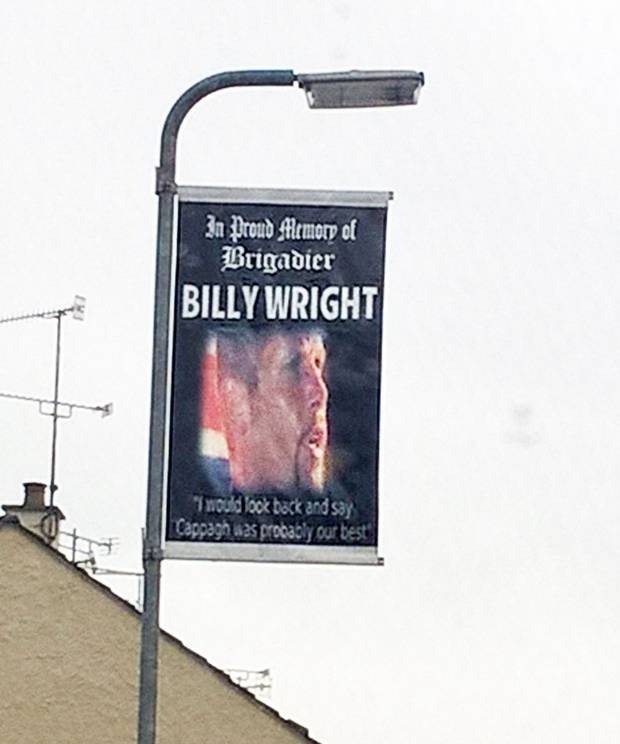 The PSNI has refused to remove an overtly sectarian and grossly offensive banner erected to loyalist sectarian killer Billy Wright that celebrates the murder of four men in Boyles Bar, Cappagh, County Tyrone, in March 1991.

“In the first instance this deliberately aggravated act of hostility has been motivated only by sectarian hatred. It is also an attempt to fuel sectarian tensions within the area more generally.

“It is provocative in the extreme. It is a hate crime that further victimizes the bereaved families and survivors, one of whom was shot and seriously injured.

“The erecting of the banner constitutes a clear case of sectarian hate crime under the current definitions breaching several major tests as laid out by the Public Prosecution Service (PPS).

“The erection of this banner is motivated by sectarianism, prejudice, hate, hostility, bigoted dislike, and manifests in abusive and insulting words and behaviour; the key tests as laid out by the PPS.

“Further the PSNI has publicly stated that whilst some people may find it offensive others will not and therefore they have a sensitive balancing act of competing rights.

“This PSNI statement is an appalling admission from a police service that claims to uphold and apply the rule of law impartially. It is clear that this is not the case at all in this instance.

“To say that there are competing rights in such a situation is as odious as the banner itself. The PSNI have now added further insult to an already grievous harm.

“This too is an attempt by the PSNI to deliberately diminish the grief of these four families. One can only ask for what motivation? Is it because three of the dead were IRA volunteers?

“Many right thinking people will be horrified at the disgraceful stance taken in the face of what is clearly an act of sectarian hate and hostility.

“To promote the notion that some will not find the poster insulting is to completely abdicate the understanding of sectarian hate crime, remove this matter from the realm of hate crime and to try and render the victims powerless under law.

“Many will therefore view this as a deliberate political act by the PSNI.

“The PSNI have displayed clear and open bias and prejudice in this instance when compared to other incidents where the law has been fully and correctly applied when sectarian and other hate crime has occurred against other sections of the community.

“The question now is why did the PSNI determine and adopt such inexcusable responses to such an appalling act of gross sectarian hatred.

“The widely held view is that the PSNI has acted partially and politically and has failed to act according to the law.” ENDS/CRÍOCH

The full report on the killings “Collusion in the Cappagh Killings”, compiled by Relatives for Justice and the families can be downloaded on Collusion in Cappagh Report

The families of the four men, understandably distressed and insulted asked that the poster and its erection be investigated by the relevant authorities as a hate crime.

In today’s Irish News the PSNI have responded to say that no action will be taken. They make the following statement:

“There is no doubt that this sign will be perceived by some to be offensive, but not by others and while we are sensitive to the feelings of victims families, the PSNI must attempt to achieve a balance between the rights of one community over another, and of course must act within the law.

“We are working with the community in an attempt to resolve this matter and we will continue to do so.”

Is this a side stepping of the PSNI’s legislative duty?

Have the PSNI failed to investigate the matter appropriately?

Has the PSNI undermined the concept of hate crime itself in this matter?

These are questions to which accurate knowledge is key.

Below is the Public Prosecution Service advices on hate crime – its definition, its interpretation and how such crime may be deemed to be in the realm of prosecution.

We feel the public should make its own determination.

Below we have referenced the relevant points on Hate Crime as contained in this PPS document:

2.1.1 – There is no statutory definition of hate crime.

2.1.3 – This means that once an offence is perceived by the victim or any other person to be motivated by hate or prejudice towards a person’s race, religion, sexual orientation or disability then it is a hate crime. Its status does not change even if there is no other evidence with regard to motivation which can be adduced before a court.

2.1.9  – This category includes ‘’sectarian’’ hate crime, that is a crime which is perceived to be sectarian by the victim or any other person. The term sectarian is almost exclusively used in Northern Ireland to describe incidents of bigoted dislike or hatred of members of different religious or political groups. It is broadly accepted that within the Northern Ireland context an individual or group is often perceived to be Catholic or Protestant, Nationalist or Unionist, or Loyalist or Republican.

2.3.3  – The Public Order (Northern Ireland) Order 1987 creates offences and provides for penalties for the use of threatening, abusive or insulting words or behaviour, the display and distribution of written material, and related activities intended, or likely, having regard to all the circumstances, to stir up hatred or arouse fear.

2.3.5  – For an offence to be committed under the provisions of the 1987 Order, there has to be one of the following: it has to be ‘threatening, abusive or insulting’, and it has to be intended to, or likely in all the circumstances to stir up hatred.

2.3.6  – Hatred is defined as meaning hatred against a group of persons in Northern Ireland defined by reference to religious belief, colour, race, nationality or ethnic or national origins, sexual orientation or disability.