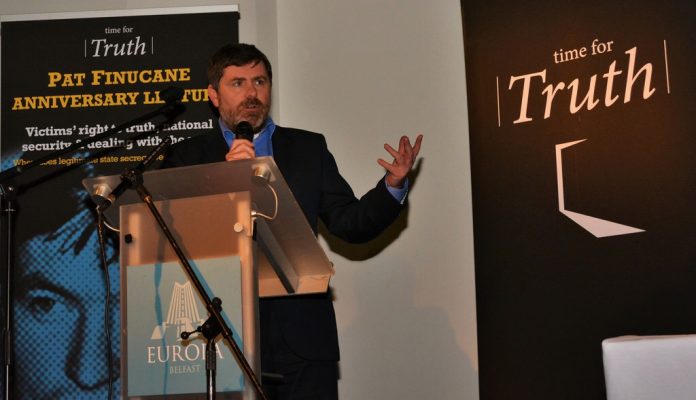 “Karen Bradley’s comments are timed to exert maximum influence on the imminent decision on whether British Paratroopers should be prosecuted for Bloody Sunday. More widely, it is a political attempt at direct interference in due process and the rule of law concerning any future prosecutions in cases of state killings.

“They fly in the face of David Cameron’s own comments regarding Bloody Sunday after the Saville inquiry and Tony Blair’s comments in setting up the inquiry.

“The comments are odious, disgusting and deeply offensive. They add further hurt to those affected by state violence and collusion.

“Karen Bradley and the Tory government have clearly demonstrated the deep-seated bias and partial approach to legacy that characterised that of Theresa Villiers when she used the term “pernicious narratives” to describe families’ pursuit of truth and justice about collusion.

“The vast majority of those killed by the British state were unarmed, and civilians, contrary to what Karen Bradley attempted to clarify this afternoon following her initial comments. Her “clarification” is as equally insulting given that the overwhelming numbers of those killed by the state, 364, including 82 children, were unarmed and civilians. Her comments deliberately ignore extensive state involvement in paramilitary killings through collusion.

“No matter how much praise they lavish on the British army it does not change the fact that they killed civilians with impunity. In percentage terms state killings represent the greatest numbers of those for whom there has been no accountability or justice whatsoever. It can clearly be said that the British state directed its campaign of violence against the civilian population more than any other grouping in the conflict and it was directed almost exclusively against the Catholic population making it sectarian. The “imbalance” that exists is in respect to the impunity administered to British soldiers and members of state forces.

“Rather than the miserable spectacle of “clarifying in case she is misunderstood” Karen Bradley should immediately resign.

“Further her government is neither fit nor neutral to take forward proposals to deal with the past. Both governments should now move to appoint an international body that can take forward a comprehensive, independent process on legacy based on the Stormont House Agreement.

“We have this afternoon contacted the Irish government to request that they address these comments.”