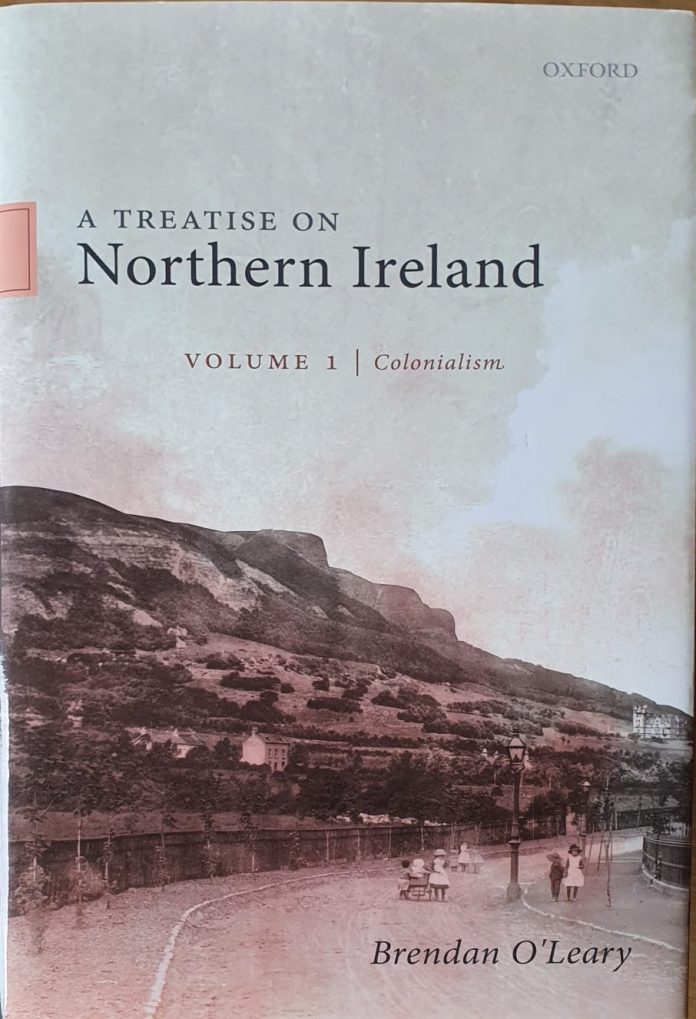 There was a famous graffiti daubed on the walls in the Falls in response to an NIO propaganda effort in the eighth year of the conflict. “Eight years is enough” was the British appeal in the newspapers and on the airwaves; “800 years is too long” came the swift response from the people, placing that phase of struggle in the context of centuries of colonialism, imperial oppression and ignorance and settler/native dispossession and hostility.

The episode came to mind when reading through a new comprehensive review of the history of the north of Ireland in the context of the long and troubled relationship between the two islands of Britain and Ireland. Throughout, the author suggests that there can be no real understanding of the politics, identities and relative dispositions of the people who live in the north eastern corner of Ireland unless one views them through the history of colonialism, with the larger island as despoiler/usurper/manager and the smaller seeking always to mitigate and/or throw off that oppression.

The three volume A Treatise on Northern Ireland is by Professor Brendan O’Leary. It is – as the jacket notes on the third volume claim – “monumental and magisterial”. Volume one – Colonialism – is history going back to the middle ages and bringing the story up to partition. Volume two – Control – takes the story of the southern state and the northern political entity (it has never been a state in formal terms) up to 1972. The final volume – Consociation and Confederation – brings the story up to the present and suggests likely developments moving into the future. Despite the very significant impact of Brexit on the issues being discussed, O’Leary nevertheless manages to bring the story to a realistic conclusion.

A county Cork man, O’Leary is Professor of Pennsylvania University and Visiting Professor at QUB. Having studied and written and debated the political history and political science of Ireland for decades, Prof O’Leary informs us at the end of his introduction that these volumes will be “my own last words on the subject”, though he is sure much more will be said and written on it. Of that there can be little doubt. But no work going forward will be able to avoid having to address his thesis. The only real complaint is the price (£75 for each volume!) which means that far fewer people will be able to access this compelling read than it deserves. If you have an interest in Irish history, make use of your public library while it is still there.

From an RFJ point of view, the book is a valuable addition to the literature on what took place during the conflict. The very first chapter is “An Audit of Violence after 1966”; in the course of 70 pages, the author provides an extremely coherent overview of the themes and trends during the war, the policies of the combatants and how they changed in response to each other. The author remains creditably sceptical of state and non-state propaganda and instead assesses their actions with a clarity unusual in such surveys.

Towards the end of the final volume the author assesses the conflict and allocates strategic blame in the context of being critical of all parties for the human and physical cost of their actions. It is an extraordinary tour de force and demonstrates the direction of travel as time allows more perspective and less emotion to influence our evaluation of what happened.

The key finding for the legacy work of RFJ is the following: “No one denies that republicans killed more people in the course of the current conflict than any other combatants. The question is whether loyalist killings and killings by state security forces should be treated as separately or conjoint.” (Volume III, page 287)

Here is the foremost expert of political science in respect of the recent history of the north of Ireland applying all his knowledge and expertise to an assessment of the conflict concurring with RFJ’s analysis.

There were basically two sides in the war: it is the depth and extent of the British state’s relationship to loyalism that remains to be uncovered, but the fact of their common purpose is really beyond doubt.

It is no wonder that the British state continues to try and manage information and prevent families, their lawyers and NGOs such as ourselves from accessing the truth. In prosecuting that search, Professor Brendan O’Leary has made a valuable contribution as well as leaving a monumental legacy of his own to future students of the history of Ireland and all that has happened in all its 32 counties over the last few hundred years.