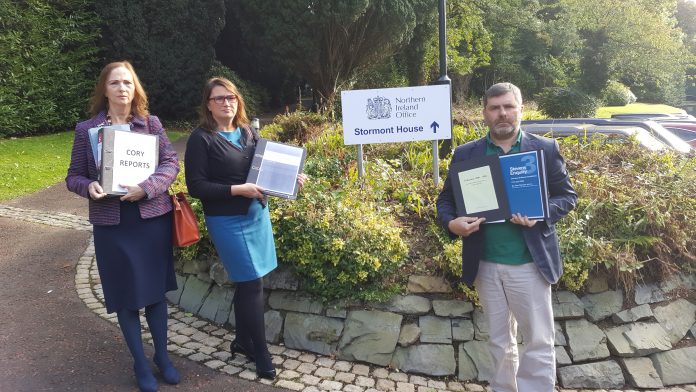 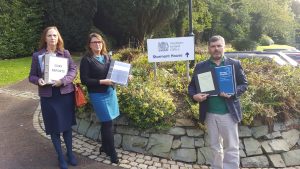 Relatives for Justice meets with British Secretary of State

This morning Relatives for Justice met the British government representative for the North, Secretary of State (SoS) James Brokenshire MP, at Stormont House.

The meeting was at the request of the SoS as part of his wider process of hearing from organisations and families about dealing with the past following the failure to implement the four mechanisms agreed as part of the Stormont House Agreement (SHA) back in December 2014.

Despite the position of the Secretary of State that his intentions are to “persuade and encourage a positive environment on the past” we argued that the families of state violence and collusion witness the intent of the UK government in courts every week through continual processes of denial and delay; the failure to disclose information, the failure to trace soldiers and policemen involved in killings, and the destruction of evidence. This we said was the ‘national security’ experience.

It was summed up as the three D’s – Denial, Delay, and then waiting for relatives to Die. We told him this wouldn’t work.

This we added was a policy of cover-up and concealment that is very much alive – it equates to a policy of impunity.

We told the SoS that families require the demonstration of a different intent – the intent to implement the agreed mechanisms within SHA in compliance with human rights law for ALL victims.

We told James Brokenshire that if he were to immediately release the funds to enable the Lord Chief Justice (LCJ) to hold inquests that this would create a positive momentum and a better environment for moving forward with the SHA.
This would help build trust and confidence.

We also raised the matter of a statement of acknowledgement for the victims of state violence and collusion. Republicans and loyalists have issued statements to this effect to those they harmed during the conflict.

The UK government has yet to make a statement acknowledging the hundreds of killings its police, military and intelligence agencies were involved in. This could form part of the “positive start” that he talked about – notwithstanding current cover-up.

We stated that if there is to be a public phase of consultation on the SHA mechanisms then a statement of acknowledgement from the UK government should form part of that public process.

However, we also stated that we have had Eames/Bradley, Haass/O’Sullivan and Stormont House – families feel that there has been enough talking and it’s time for implementation.

The only roadblock is that of the ‘UK national security’ veto and onward disclosure of information through one of the proposed mechanisms in the SHA, the Historical Investigations Unit (HIU), to families concerning the killing of a loved one. We said that this position was unacceptable.

We said families viewed any consultation or public phase as seeking to create further obstacles and barriers to implementation.

We consistently told the SoS that the guiding principles required in governing the agreed mechanisms were compliance with international and domestic human rights standards.

We also reiterated that these were fundamental rights to which the UK had legal obligations in upholding.

In response to public statements by the SoS at the recent Conservative Party conference that he would not allow “history to be rewritten” we strongly pointed out that the narrative in respect of state killings and collusion remains covered up and untold.

Our job, we said, was to ensure that this truth is told and fully accounted for.

Pictured are Carmel Quinn, Andrée Murphy and Mark Thompson carrying copies of RFJ’s Collusion report, the De Silva Review on the murder of Pat Finucane, John Stevens’ 3rd report on collusion and the Cory Reports on collusion which were presented to James Brokenshire