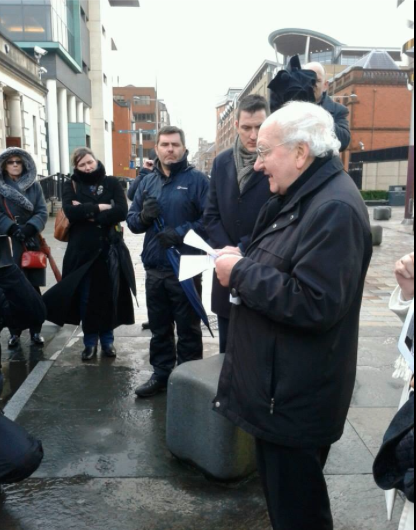 What’s in a name? In time it absorbs the whole character and nature of the person. The name Pat Finucane reverberates in our hearts and minds – takes possession of us – his intelligence, his affection, his care, his nobility. And may I say that name reverberates throughout the world. Yes, he made his name. He never failed to be troubled when tormented families made supplications to him regarding a dear one who suffered unjustly and he carried their supplications not only in the files under his arm but in his very being.

He did everything in his power to seek justice and truth and from the day of his martyrdom disciples followed in his footsteps – in his family led by Geraldine, in the Pat Finucane Centre, in Relatives for Justice, in the Committee of the Administration of Justice, in British Irish Watch and indeed in many others at home and abroad. Sadly his mother Kathleen died on 12 October 2013. She longed to see justice done for her son.

Pat Finucane was murdered by members of the UDA on 12 February 1989 in his home at his family meal with Geraldine his wife, his children John, Michael, and Katherine. Yes, Ken Barrett was sentenced to 22 year for his part in the murder. He served less than 4 years having qualified for early release. William Stobie supplied the murder weapon – an agent of the security forces he said he had informed his Special Branch contacts of the coming attack. If so they held back from giving a warning – why? Stobie was shot dead by loyalists in December 2001. Dead men tell no tales. One of the two murder weapons in the Pat Finucane murder, a Browning pistol, was recovered by police but then given back to the British Army, a key exhibit disposed of. Brian Nelson, agent of the security forces, planer of the attack, was both a member of the British army under direct command of an officer of colonel rank and he was a senior intelligence officer in the UDA. It is likely that Nelson produced an intelligence report used by the killers, carried out a reconnaissance operation at Pat Finucane’s home and supplied Barrett and another loyalist with Pat’s picture. It is said that Nelson’s name has been linked with at least 30 murders. Nelson received a 10 year sentence in February 1992 for his role in loyalist violence. The Force Research Unit of the British Army used Nelson to infiltrate the UDA. The FRU reported directly to the senior commander in Northern Ireland. Question – to whom in Government did the senior commander report? Nelson claimed in his prison diary that as early as December 1988 he informed the Force Research Unit of British Intelligence that Pat Finucane was targeted. Nelson died on 11 April 2003.

Following the Weston Park talks for a peace settlement in July 2001, Judge Peter Cory was appointed by the British and Irish governments to inquire into six cases of alleged collusion north and south. On 7 October 2003 he handed over his reports to the two governments. Pat Finucane was one of the northern cases. The Secretary of State for Northern Ireland, Paul Murphy, on 1 April 2004 while announcing immediate public inquires into 3 cases did not include Pat Finucane, a delaying action. The Irish Government and Judge Cory were disappointed. A public inquiry had been promised at the Weston Park talks. It was clear that it was fear of revealing the depth and breadth of collusion that caused the British Government’s prevarication. Following on, the Inquiries Act of 2005 aimed to destroy the chances of the search for complete truth and the implementation of the Cory recommendations in full.

We are sill asking the same questions over the years. Was the murder of Pat sanctioned by the British government? An Independent Inquiry would obviously call on Douglas Hogg to give evidence. On 17 January 1989, three weeks before the murder of Pat, Hogg then a junior government Home Officer stated in Westminster that ‘there are in Northern Ireland a number of solicitors who are unduly sympathetic to the cause of the IRA and he added – “I state it on the basis of advice that I have received, guidance that I have been given by people who are dealing in these matters ..”’ Who were these people?

Collusion of the British forces, government and all, with loyalist murderers – lethal allies – has been a major factor in the 30 years war here. Truth has seeped out little by little in inquiries and several personal revelations . But major questions need still to be answered and it is not just enough to issue one line state apologies years and years after the murders. Years ago we had the Stalker inquiry. He dug deep. He was removed from the case – yes, the authorities obviously had something to hide. We did not get seeing it. John Stevens gave us three reports. What all did they say about the Force Research Unit? Why was Pat Finucane not given police or military protection? Stevens was not allowed to give a public answer and we did not get reading his reports. Are we not, the public, entitled to the truth? On 14 January 1998 Stevens said, ‘As you will be aware the reports submitted by me are the property of the Secretary of State for Northern Ireland and the Chief Constable of the RUC. I am therefore not in a position to release the reports or indeed divulge any of the contents. The reports are highly classified and authority of the above persons will be required before information is released’.Will Theresa Villiers, present Secretary of State, and Chief Constable Matt Baggott appropriately on this 25th Anniversary of Past Finucane’s death step forward and release those reports? They belong to us, the public. On 17 April 2003 after his Third Report revealed collusion between British Army, RUC and loyalist paramilitaries Stevens said in obvious frustration: ‘from Day One, my inquiry team was obstructed in its work … it should not have taken 14 years to get to where we have gotten now’. But that is the very reason why it is necessary to have an independent Inquiry. On12 April 1999 Param Cumaraswamy, special rapporteur of the United Nations, had called for an independent inquiry into the murder of Pat Finucane. He repeated it on 3 June 2000. On 13 February 2002 USA Lawyers Committee for Human Rights published a report on the killing of Pat Finucane and called for a public inquiry. Internationally hundreds of lawyers have called for a public inquiry. Concern is being expressed year after year.

The Finucane family have continually gained the attention of the public at home and abroad by holding firm to a a public inquiry. In November 2010 Secretary of State Owen Paterson met the Finucane family but again applied the delaying action. Stall, stall, stall. Running into the middle of 2011 it was accepted that the British Government would announce the holding of a public inquiry. The shock came, a great insult was delivered and anger spread on 11 October 2011 when Prime Minister David Cameron in Downing Street told the family and solicitor Peter Madden that he offered a review of the case led by Sir Desmond de Silva QC. John Finucane said: ‘The previous government accepted Judge Cory’s recommendation for a public inquiry albeit under restrictive legislation. We would not even consider accepting an offer which amounts to a closed-doors process that will not be up to any scrutiny’. How true the words also of Michael Finucane when he told a subcommittee of the House of Representatives, Washington, that security force collusion in the murder was the ‘last great historical issue’ for the British Government in the Northern Ireland conflict. A question remains – who persuaded David Cameron to desert the public inquiry? Witnesses who feared to be called to give evidence and be cross-questioned?

De Silva reported in December 2012 . He said ‘The real importance in my view is that a series of positive actions by employees of the state actively furthered and facilitated Finucane’s murder and that, in the aftermath of the murder, there was a relentless attempt to defeat the ends of justice’. There is a paradox there – de Silva’s review of the case instead of a public inquiry was an attempt to defeat the ends of justice.

That relentless attempt continues but we are gathered here today with members of the Finucane family to repeat the call for an independent inquiry. We want to question not only those employees of the state who furthered and facilitated Pat Finucane’s murder but to question also their employers, the ministers of state.