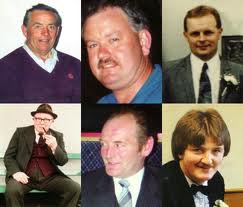 As you will understand today is one of mixed emotion for us all.

Today I’m thinking about my daddy, my grandfather, and all those murdered that awful night on June 18th 1994 when they went to watch a soccer match at their local pub.

Today we finally have a report by the Police Ombudsman – at last – that vindicates our long held suspicions and beliefs that the truth about these murders was being covered up by the very people – the police – that were supposed to protect us, be on our side, and investigate and bring to justice those responsible.

Incredibly the Police Ombudsman said that the activities of the UVF gang could and should have been disrupted by the police and had this occurred then the murders of our loved ones might have been prevented. However, the police were more concerned about the activities if republicans.

After the attack we also find that police officers not only failed catastrophically to investigate those suspected of being involved they also tipped off and warned them of raids and arrests. They actively worked against truth and justice.

One of those suspected of killing our loved ones continued to work for RUC Special Branch until long after the atrocity. How can this be?

Recently Theresa Villiers said that there were ‘pernicious narratives’ being written about past atrocities – she referenced Loughinisland.

Our journey has been a very difficult one and we have travelled all over the world to speak out and we have been well received and supported. However, many of us have been vilified here at home for daring to speak out and challenge the State lies – but we have exposed collusion despite a previous Ombudsman report that sought to conceal the truth. We even had to go to court to have that report overturned.

That reference by Theresa Villiers is absolutely hurtful and was a deceitful attempt to rewrite the truth about what happened to our loved ones whilst she and her government knew full well the truth about Loughinisland – we call on her to retract her remarks and to apologise today to us.

Importantly the Ombudsman has reported on the role of the RUC at the time.

It is now up to the British government to ensure that there is full accountability for the roles of British army intelligence and MI5 secret service for their part in providing the weapons used to murder our loved ones, and hundreds of other people.

Crucially these intelligence agencies all ran of key agents and informers who were involved not only in the murders at Loughinisland but also many, many more.

We now need justice and accountability from those in authority.

I am a survivor of the Loughinisland atrocity.

Our family owned the Heights/O’Toole’s Bar.

I was working in the bar at the time of the attack.

I was shot and seriously injured – but thankfully I survived.

Others too were injured and survived and they are also here today.

As a group we support one another and have campaigned together for the truth about what happened.

There is never a day that I don’t think about that evening – it never leaves me.

I live with the legacy and trauma of that evening and so does my family.

We were a small rural community that had been relatively untouched by the conflict.

That we find out that the police and intelligence services imported the weapons used by to murder and maim makes it all the worse.

This makes the call for the full truth and justice all the more important.

I am also conscious of the hundreds of people killed by these same weapons and the devastation caused to countless lives.

In particular all those who live with appalling injuries  – the survivors just like me.

We all deserve and demand justice from the British government who are ultimately responsible.