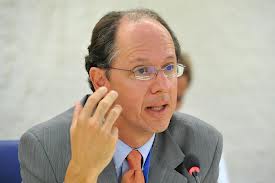 A Preliminary Response to the Report of the UN Special Rapporteur on Truth, Justice, Reparations and Non-Recurrance Pablo De Greiff

RFJ Director Mark Thompson has welcomed today’s report by UN Special Rapporteur on Truth, Justice, Reparations and Non-Recurrence regarding dealing with the past in Ireland.

Describing the report as “excellent” and “comprehensive” he points to the report which echoes the calls by NGOs, politicians and civic leaders for the Lord Chief Justice’s plan on legacy inquests to be resourced and implemented.

The UN rapporteur has also cited the over use of national security concerning disclosures of information to families regarding the killings of their loved ones and has fundamentally underlined and promoted the right to truth of families.

“Asserting the obligation to protect the life of citizens does not override obligations stemming from the right to truth. No single right to life trumps other “weaker” rights. The right to truth can be construed as a way to (at least partially) redeem the right to life of those who have been killed by State or non-State actors. Instead, the point must be to find ways of satisfying the right to truth for victims and society while acknowledging the complex conditions under which this must be done, which are compounded in Northern Ireland by the widespread reliance on informers.” page 10 point 46

The report cites the cuts to funding of the Police Ombudsman in 2014 as eroding confidence in that institution, which families fully concur with, notwithstanding that despite this attack on that office confidence is being re-established under Dr Maguire.

Pablo De Greiff has called for the full implementation of the mechanisms agreed at Stormont House including the provision by the UK of effective resources enabling them to function correctly. Noting persistent failures around independence, namely the HET and delays around inquests, he has underlined the need for independence and adequate resourcing in all mechanisms to deal with the past as critical to their success.

We welcome his commentary and advices around fully inclusive processes and the need for thematic processes including examination of structural violence and the needs of the injured as well as the bereaved. In particular we welcome his commentary on reparations for victims in which he states these issues should be tackled seriously and systemically.

Pablo De Greiff also addresses the absence of a gender lens, an area which our organisation has given leadership on, given the majority of those killed were male and those left picking up the pieces were women. This is quite apart from the fact that in many instances women were specifically targeted also.

We agree that the issue of inclusiveness around victims, should be based on a human rights framework. This must not be sectarian or driven by sectional interests that seek to separate victims and their needs, which has to date promoted and fostered division. We welcome the comments which seek to promote bridge building.

Dealing with the Past must be comprehensive, fully inclusive, robust and above all independent.  These principles are consistent throughout the report and most welcome.

If we are to build a society beyond conflict these key principles must govern any future process.

The British Government, having had advance access to this report, must now move to implement all of the recommendations in full.

The report can be read at this link http://www.ohchr.org/EN/Issues/TruthJusticeReparation/Pages/CountryVisits.aspx