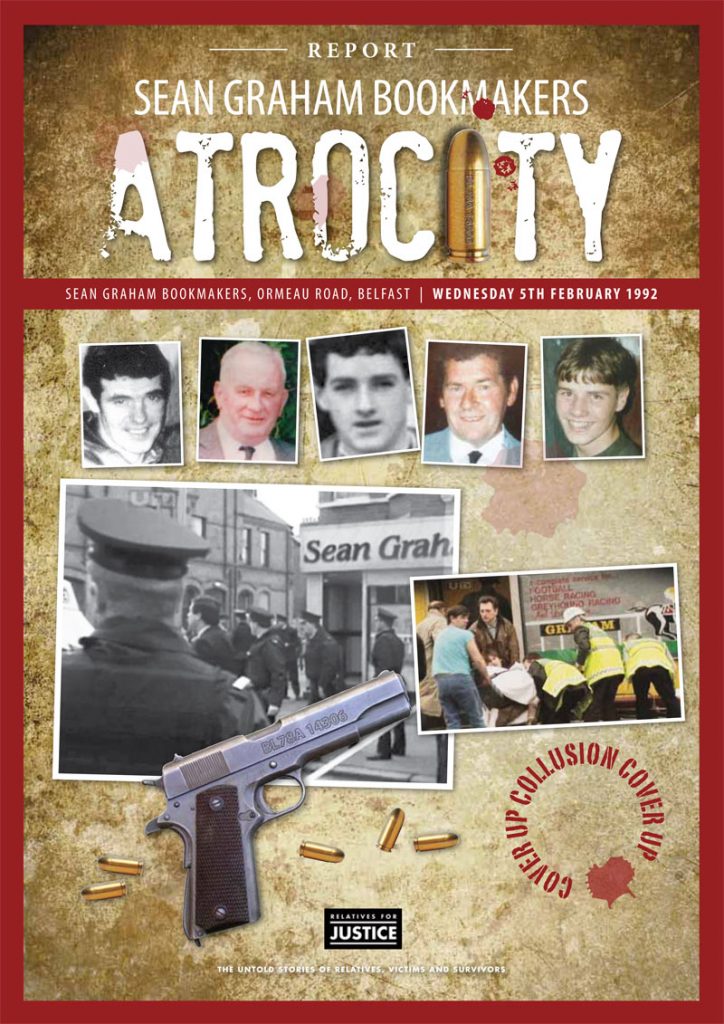 Families bereaved in a UDA attack on Sean Graham’s betting shop on the Ormeau Road have welcomed an apology from the PSNI Chief Constable following a meeting at PSNI HQ, Knock.

The apology relates directly to police providing one of the murder weapons used in the atrocity to the Imperial War Museum, London for the purpose of public display.

Earlier this year the families learned that the murder weapon was on display after the Police Ombudsman tracked it down to the Museum.

Previously the PSNI’s HET, and the RUC, had told the families the ‘murder weapon no longer existed’ and had been ‘disposed of’.

In a statement issued through Relatives for Justice and KRW Law the families said:

“To say that we were totally shocked when we learned of the whereabouts of the murder weapon would be an understatement.

“To think that this could happen in an ongoing murder inquiry beggars belief. Some of the survivors and bereaved families viewed it as some sort of trophy on show given the role in the attack of the intelligence services and agencies. MI5 provided the weapon via an agent and the other gun used was a British army weapon supplied by the Special Branch.

“The public display caused a great deal of stress and hurt to an already very difficult atrocity that remains to be properly investigated.

“We are also aware that the same weapon is linked to other murders.

“We discussed with George Hamilton the practice of the provision of the weapon by police and sought assurances that every shred of evidence and detail concerning the atrocity would be provided to the ongoing inquiries by the Police Ombudsman.

“We welcome the apology by the Chief Constable and remain focused on ensuring that the Police Ombudsman’s inquiry delivers truth and accountability for the murders of our loved ones and those who survived the attack.” ENDS

Those murdered in the atrocity are as follows;

The weapon in question has now been removed and the Police Ombudsman has taken custody of it.

There is also an ongoing investigation as to how it was provided.

Concern too exists about the ballistics history of the weapon given the role of the intelligence agencies in the atrocity. It has recently been exposed that a shadowy ballistics group run by Special Branch, WERC, had been engaged in the highly questionable practice of conducting examination of weapons prior to even the regular forensic department gaining access to weapons as part of murder investigations by the RUC.

During the inquest into Roseanne Mallon it was shown that ballistic evidence provided by WERC in respect of two weapons responsible for 17 murders and a number of attempted murders was false.

BBC Spotlight examined the role of WERC as used by Special Branch and the handling of weapons that were later used to carry out murders amid later claims that these had been rendered inoperable.

In the atrocity at Sean Graham’s that claimed the lives of our loved ones the gun provided by Special Branch, when discovered by Lord Stevens during his inquiries, was similarly claimed to have been deactivated. This was untrue.

The families also challenged the Chief Constable on his defence of the use of agents during an interview with journalist Darragh McIntyre in the BBC Panorama special on collusion. This was the programme that had first reported on the whereabouts of the murder weapon. George Hamilton claimed that the use of agents had saved lives The Ormeau Road families pointed out that this was both crass and insensitive given that collusion had claimed hundreds of lives from across the community.