Statement released through Relatives for Justice –

Murdered boys’ father speaks out about PSNI inaction one year on from BBC Spotlight revelations of agents, collusion and murders

A year on from the broadcast (October 15th 2019) of a landmark BBC Spotlight programme that revealed the role of agents within the Mid-Ulster UVF involved in scores of sectarian murders, the PSNI has yet to respond.

One of the key incidents that Spotlight focussed on was the murders of brothers Gerard (22) and Rory Cairns (18) on October 28th 1993.

Wright as an agent

BBC Spotlight also spoke to its own sources further stating that they had been told “…by two senior security sources…” that Billy Wright had been “… a security force agent…” working for “…both the police and military…”. 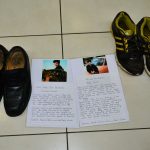 The murdered boys father Eamon Cairns said: “This new information should have immediately warranted the reopening of a fresh independent investigation by the authorities, yet there has been absolutely no action.”

Shockingly the PSNI has yet to contact the Cairns family, or sought to interview Laurence Maguire, or the programme makers.

BBC Spotlight also interviewed HET Detective Chief Inspector Dave Hoare from England who examined some of the murders carried by the Mid-Ulster UVF. His commentary is noteworthy in that when asked about why so many of these murders remained unsolved he said: “…it raises the question, did the RUC not try hard enough or were they just not good enough to deal with the Mid-ulster UVF? Well I don’t buy the argument that they weren’t good enough, they were certainly good enough.”

Eamon Cairns added: “The significance of these comments brings into sharp focus the very reasons why the RUC investigation into the murders of Gerard and Rory failed to bring to account those responsible. It was to protect agents and their handlers.

Despite the killers leaving a treasure trove of forensics, as one of the getaway vehicles containing the balaclavas and boilersuits worn by the killers failed to properly ignite in an attempt to destroy evidence, no one has ever been brought to justice for the double murder.

When presented with the evidence by Spotlight Mrs O’Loan, who unbelievably failed to find collusion in her investigation, stated that if she were still ombudsman she’d reopen the investigation. She stated that:”… if that evidence had been available to me it would have changed a lot things.”

As noted by the family lawyers, Madden & Finucane: “It is difficult to consider that such an extensive and significant catalogue of errors was the result of mere negligence.”

“At least three agents, including Jackson and Wright, were involved in the murders of my sons including the conspiracy the previous year.

“The third agent, one of the actual gunmen who shot Gerard and Rory, was Alan Oliver who is responsible for up to 15 murders. Spotlight confronted Oliver asking if he was being “protected” from prosecution by his handers.”

Despite being named in court documents as the gunman in a triple murder in 1991, Oliver has never been prosecuted for any terrorist activity.

Concluding Eamon Cairns said: “In any other society there’d be an outcry and immediate police action. As far as I’m concerned the cover-up is still ongoing and the PSNI are as much a part of it as the RUC were.

“Our family has been failed by three investigations involving the RUC, police ombudsman, and the HET. And the inquest system at the time was also deliberately prohibitive in examining the facts. How come groups like Relatives for Justice and the BBC could uncover such evidence yet all these investigations could not?

“In light of all the evidence, in the face of deliberately flawed investigations and inaction by the PSNI, it’s clear to me that the only way forward is to have a public inquiry.”

“The PSNI agenda is also the British ‘security’ agenda of concealment regarding state wrongdoing, hence their inaction.

“It is all about protecting former handlers within speical branch and those they colluded with in scores of murders rather than investigating such atrocities.

“This would be shocking if it were an isolated incident. Sadly it is so blatantly systemic.