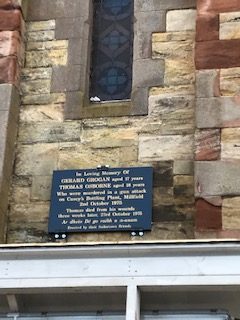 Today Relatives for Justice were honoured to be a part of the commemoration of those killed in Casey’s Bottling Plant in October 1975. 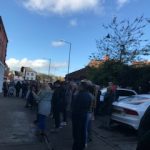 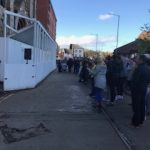 The following is the speech delivered by Deputy Director Andrée Murphy as part of the unveiling of the plaque dedicated to Gerard Grogan and Thomas Osborne.

And for the opportunity to be a part of this incredible project.

On reading the different chapters in the book you hear the authenticity of the voices of those who contributed. The book gives value to those words spoken from the heart, recalling difficult and painful memories.

Too often we do not take the time to value and give weight to honestly spoken words and memories. The politics of dealing with the past gets in the way of hearing what we need to hear. Why the person is missed so much and why memory is so important.

From reading this book it seems to me that in another life Thomas would have been employed by the emergency services. Courageous, kind and quick thinking. He was a natural fire fighter or paramedic. With different opportunities and no conflict, he clearly could have been anything at all. But this book lets us know that. We get to know a young man who was wise beyond his years and those of us who did not know him are allowed to appreciate how enormous his loss really was and reflect on what our society lost, let alone his family and friends.

The loss of the baby of the house with Gerard – whose nickname “Coke” sums up so much innocence – is so well explained in the book through the incidental references to the impact of the loss. Who cannot be anything other than moved by the image of the over protective mother, calling her child’s name, unmoved with her arms crossed at her front door, until her baby is safe inside. Her pain is referenced to as never getting over it. The father who never drank on a Sunday taking three drinks – such a huge change in behaviour it is still remembered by his surviving son. In that simplicity we get a glimpse of the impact of loss and are forced to pay attention.

This is not a recording of statistics. It is a contribution to our understanding of why conflict must never happen again. These killings were not conflict events. They were families torn apart, communities devastated, society diminished. And that did not only happen on the days that these people died. That happened over the subsequent decades.

It is not a simple book of a collection of reminiscences. It is a deeply complex book which touches on the experience of our conflict in a working class community, disproportionately harmed during those terrible years.

The Begley family’s experience for instance, at first glance looks like it is an incidentally tragic story. In fact it shines a light on huge thematic issues. The experience of a hard working family where everyone, young men, mothers with large families all had to work to put bread on the table. The experience of mothers who lose their children and never recover from the grief. How their pain is incredibly unique. The impunity of the RUC for their brutal use of plastic bullets. The almost unspeakable strength of a family that endured so much pain and loss and yet somehow do not figure in the statistics of our conflict. All of which underlines the deeply impressive necessity for this book today.

And interweaved are references to the killings of others and the experience of conflict throughout the community. Hector Heath referencing the Springhill Massacre – connected in his memory as so many who have experienced such trauma draw unseen lines of connection between the incidents of horror. Don’t we all do that?

Annemarie McWilliams sharing her memories which are framed by her imprisonment in Armagh Jail and just mentioning Monsignor Raymond Murray, another person of record who has written nearly as many books as Brian Quinn. Anne Marie herself was to lose a brother and husband to our conflict.

The killing of women during our conflict was unusual. Statistically only 9% of all of those killed were women. To lose two women during the conflict was very unique. Losing a mummy was very unique. The experience of Sam Casey, losing two daughters was unimaginable. This horrific incident caused mothers to lose their children, a loss they would never get over, and children to lose mothers. It is a uniquely devastating incident that deserves attention and recollection. That it was in the working class nationalist community of Sailortown might explain why it was not given the focus that it might have been.

The worst insult to those who have died is to forget or to deliberately close the opportunity to memory. There are some who ask us to draw a line under the past. For us all to move on. Obviously families and friends never forget. They also teach the rest of society emerging from conflict how to move forward without forgetting. With the memory, learning the lessons, appreciating that we will never be the same again, noticing what has changed and adapting to that.

The word closure is one of the most harmful words that is used. It is like demand placed on us. It is telling relatives or friends that they should aim for silence. That the impact of this devastation has an end point that should be identified and aspired to and then we never need mention it again. It is insulting as well as mythical. This project recognises that. The conflict has changed us. The families who have lost will never be the same again. The communities that hold those memories and families will never be the same again. Silence and denial of memory is what is harmful. Open recognition of that experience, safely expressed and universally recognised is healthy and enriching, even if it is painful. Silent isolation is however far more painful.

Processes to deal with the past have failed victims, families and society as a whole. Right now we are getting a lesson in how not to do it with so much vitriol and contest. This project shows us how some of the work can be done. With integrity, authenticity and not shying away from pain but engaging with it respectfully. Law and accountability will also be a part of that picture, and that should follow. These are not just stories, there is a prerequisite for the rights of all of those who died, who had their rights violated, to be addressed. That is not an optional extra. And cannot be signed away by anyone. There needs to be accountability under the law.

Our society owes Brian and all of those who have contributed to this book a debt. This commemoration and this book has made visible experiences some would prefer remained hidden. They have disrupted that consensus, chosen not to draw a line, refused the self-serving insistence on closure and safely and respectfully demonstrated that Gerard, Thomas, Frances, Marie and Stephen can never and will never be forgotten.