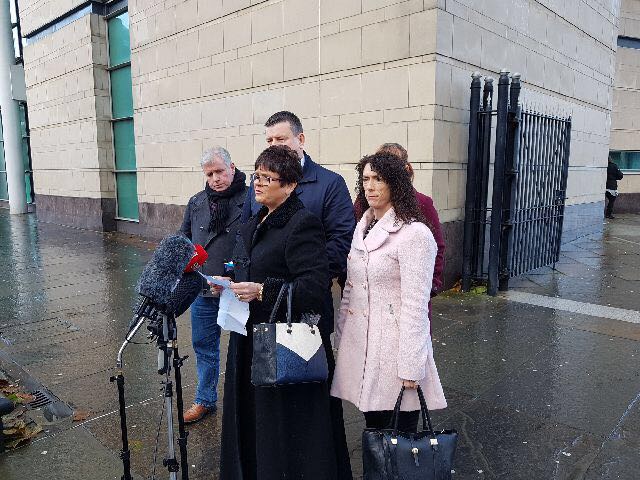 This week RFJ spent two days at court with the families of those affected by the collusive actions of Gary Haggarty, other UVF agents and the RUC/PSNI handlers who directed and protected them. The depth of pain and loss felt by those who have been victims of Haggarty’s violence was clear to see as they listened to the brief details provided about their loved ones’ murders.

The sheer volume of charges accepted by Haggarty is unprecedented. Haggarty pleaded guilty to 201 offences with a further 301 ‘taken into consideration’ – all very serious charges, but unlikely to lengthen Haggarty’s overall sentence.  The crimes discussed ran over a 16-year period from 1991 to 2007, long after the alleged UVF ceasefire and the Good Friday Agreement.

What these numbers don’t reveal is how complicit RUC Special Branch were in directing and facilitating the criminal activities of Haggarty and others. The degree to which the UVF were enabled to control whole communities and run a criminal empire directed at murdering the Catholic population and anyone they suspected of Republican views was incredible when outlined to the court.

Yet we know that it was only an outline that was given, not a full exposition of the facts. As part of Haggarty’s sentence reduction deal he was interviewed more than 1,000 times, in interviews which run to 12,000 pages. Small excerpts of these were mentioned in court, and contained information which was difficult for the families to hear. Details such as the full extent of the injuries inflicted on John Harbinson, how Haggarty put a gun to the head of Sean McParland’s grandson, and how he shook the hand of another UVF member, wishing them luck before the shooting of Gary Convie and Eamon Fox.

The families sitting in the public gallery became increasingly frustrated throughout the hearing at how the Public Prosecution Service presented the case. Whilst describing the activities Haggarty was involved in, prosecuting counsel skipped over most of the information relating to RUC Special Branch and their involvement in the cases. No reference was made to Haggarty acting as a police informant across this period. It was close to three hours into the hearing before ‘a handler’ was mentioned, and little was said about them after this by the Crown’s representative. Having already been failed by the PPS in refusing to use Haggarty’s evidence to prosecute other cases, the families felt the PPS approach was designed to obscure the role of RUC Special Branch and the State in assisting Haggarty, and stop the families gaining more information about who exactly had knowledge of his activities.

At the outset the prosecution stated Haggarty had named many individuals involved with the UVF, but the Crown would not refer to them, citing their Article 2 rights and because the PPS did not want to prejudice ongoing or future investigations. Given how the families’ rights in relation to Article 2 have been persistently ignored and the PPS refusal to prosecute based on existing evidence, many families found this approach appalling and contributed to the sense of inequality and injustice in the case. Less regard was given to people who had made witness statements relating to some of the murders, who were all named in court.

Four charges of directing terrorism, covering the whole of Haggarty’s criminal and informant career were included on the indictment. There was no mention that Haggarty was directing terrorism whilst employed by the State.  A summary of the murders of Sean McParland, Gary Convie, Eamon Fox, Sean McDermott and John Harbinson were provided to the court, along with the murder of Peter McTasney, where Haggarty was charged with aiding and abetting a murder. In each case the court was made aware of the role Haggarty played, his position within the UVF at the time of the murders and the number of other individuals involved in planning, sanctioning, carrying out the attacks, the weapons used and those involved in covering up the crimes. The charges covered all the time Haggarty was an informant, and it could be seen how each act committed led to him moving up the ladder within the UVF to a senior position, therefore becoming more useful to his handlers.

It’s not possible here to go through all the conspiracies to murder, attempted murders, woundings and assaults that Haggarty was involved in. His list of victims is lengthy and his role in each of the cases varies depending upon his position with the UVF at the time.

Alongside the charges relating directly to individual victims were others relating to weapons and intelligence information. These offered some insight into how the UVF and security services operated side by side over the 16 years. The UVF had access to a vast array of weapons, and Haggarty accepted having hundreds of weapons under his control and thousands of rounds of ammunition, including pistols, revolvers, hand guns, shot guns, rifles and machine guns. He was able to import weapons from across the UK, with weapons being bought and supplied from the Liverpool and Manchester area, Scotland and Wales, including hand grenades, explosives and mercury tilt switches. The UVF also set up several small-scale weapons factories, with two in particular being mentioned. One was controlled by a man from the Shankill now deceased, who reactivated, repaired and built weapons for the UVF over many years, and a UVF financed pipe bomb factory that was established in the run up to the Drumcree parades dispute. All of this was financed via criminal activity and fraud, including UVF run taxi firms and bars, racketeering and the selling of chipped TV boxes and mobile phones.

The activities of Haggarty date after the period of time covered by the De Silva report into the murder of Pat Finucane, but it’s clear patterns of information provision between the State and Loyalism remained unchanged. Haggarty admitted to having copies of internal police documents and photo montages on ‘Republican targets’ which he said had something “like a police identification upon them” as well as what was described in court as “high grade security force material” used to target other loyalists during the later loyalist feuds. Also within his possession were ‘stolen’ police uniforms, a car equipped with cameras & recording equipment which was used to follow and gather information on potential targets. Incredibly, Haggarty also revealed that he had used other covert surveillance equipment to bug Newtownabbey police station.

As part of his mitigation, Haggarty’s legal team argued that he has been giving assistance to the State for years, as an informer for the 16 years covered by the charges, and as an assisting offender under the sentencing agreement. Counsel for Haggarty said he provided over 300 pieces of reliable intelligence about things that were personally known to him, including operational planning of murders, targeting, weapons, feuds, street disorder around protests and parades, criminality and drugs. Of particular interest was that Haggarty claims to have provided to his handlers information on 44 potential incidents prior to them happening, and information on 55 murders in total. Haggarty’s team highlighted the level of assistance he had provided in relation to a small number of cases as examples. What is clear is that when information was given to the handlers, it was rarely acted upon either to prevent attacks before they happened or to hold individuals accountable after they occurred.

In the cases of Gerald Brady and Raymond McCord junior, Haggarty states he told his handlers details of both attacks in advance. It is clear the RUC could have prevented the attacks and stopped the murders.  In the case of Sean McParland, Haggarty phoned his handlers immediately after the incident and advised them of the participants and what had occurred. He gave his handlers a copy of a key to his weapons dump, told them which gun he had used in the murder and asked them to go and get it. The handlers took no action.

This case lays bare the ongoing problems that families have in seeking some level of accountability in conflict related cases. The enduring lie that somehow the use of informants helped to prevent deaths has been exposed as just that. But it’s not enough for these brief if startling details to be revealed in court, and then left for no action to be taken. Families called outside the court room for all involved in their loved ones’ deaths to be made accountable, UVF members and police alike.

Only if this happens will justice have been achieved.

The implications of this case will be many for the different institutions of the criminal justice system and the police. We will be monitoring, for example, how the Policing Board responds, particularly given the policing Board’s hands on role in oversight of the response to the Operation Ballast report by Nuala O’Loan. How can our society be assured of non-recurrence of collusion when the scale of collusion has not been fully examined or held to account?

The current Chief Constable or the PSNI is a regular respondent in cases taken by families bereaved during the conflict due to systemic failures in investigation and disclosure. The PSNI stands in contempt of multiple court orders in this regard. These cases relate to state killings and killings where collusion is evidenced.

As Sinéad Monaghan, daughter of Sean McParland put it on Thursday “The entire criminal justice and policing system stands indicted following this scandal”. And make no mistake this is a scandal of Brian Nelson proportions in terms of state complicity and cover up.