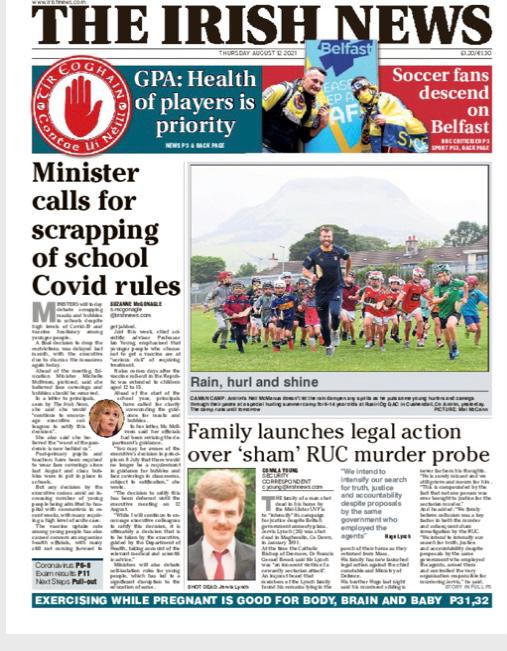 The family of Jervis Lynch murdered by Mid-Ulster UVF 1991 have released the following statement through Relatives for Justice in response to proposed amnesty legislation from the British government.

We are delighted that the Irish News has placed this on the front page of their paper with the Lynch’s family solicitor Kevin R Winters. RFJ is proud to have worked with the Lynch family for many years and is committed to supporting their quest for truth and justice is the time ahead. 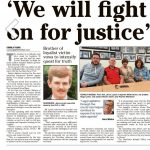 “There’s never a day that goes by without thinking about Jervis. He is sorely missed and we still grieve and mourn for him.

“This is compounded by the fact that not one person was ever brought to justice for the sectarian murder.

“The Mid-Ulster UVF claimed responsibility for murdering Jervis. That organisation was infiltrated, directed and controlled by RUC special branch, sections of the British military, and the intelligence services MI5.

“A recent BBC Spotlight programme that examined the Mid-Ulster UVF concluded that Bill Wright, its one time leader, was working directly with members of the RUC in targeting people for murder.

“The programme also cited sources that confirmed Wright was a state agent.

“Separate confirmation exists in respect to Wrights predecessor, Robin Jackson, who also led the same organisation, as also being a state agent.

“Jackson, a former UDR soldier, worked closely with others in the UDR, and RIR as it later became, in order to carry out sectarian attacks and murders across Mid-Ulster.

“Jervis was harassed and threatened by members of the UDR; who were UDR by day and UVF by night.

“We firmly believe collusion was a key factor in both the murder and subsequent sham investigation by the RUC.

“We intend to intensify our search for truth, justice and accountability despite proposals by the same government who employed the agents, armed them and controlled the very organisation responsible for murdering Jervis.

“It is abundantly clear that the British government has much to hide about its dirty war and collusion.

“As a family our message is loud and clear, along with Relatives for Justice, and all other families, we are never giving up.”