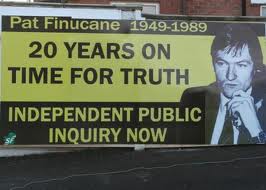 In an 86 page judgement, Judge Ben Stephens today rejected Geraldine Finucane’s challenge to David Cameron’s refusal of a public inquiry into her husband’s murder. He chose to conclude that any government must be able to change policy and laid out the legal framework that must underpin such a change at the macro political level. He held that the change of view was properly considered and laid out the government’s decision-making process which, he said, was composed of rational grounds.

While Geraldine Finucane did have a legitimate expectation that the government should fulfil its promise to have an inquiry as stated at Weston Park, there was no absolute right to be consulted before a change of view, particularly in circumstances that included a change of government after a general election.

While dismissing the application, the judgment nevertheless set out in great detail the variety of investigations and reviews of documentation that had occurred in this case. It also addressed the question as to whether there remained a requirement to hold an article 2 (right to life) compliant investigation. The judge concluded that, whatever about whether previous investigations – including prosecutions – amounted to a fulfilment of the article 2 procedural requirement, the review by Desmond De Silva had uncovered and published significant new information that had not been considered by criminal investigators and/or the public prosecution authorities. In the judgment he sets out in detail the disturbing findings of collusion that were the conclusions of the De Silva review.

Judge Stephens therefore held that there is a continuing requirement on the authorities to complete an article 2 investigation into these matters and he invited submissions from the parties on how these might be concluded.

The major problem with this lies in the fact that, after the De Silva review was published, the PSNI Chief Constable asked the now defunct Historical Enquiries Team (HET) to consider the new material. With the HET out of the picture, lacking sufficient independence to carry out impartial investigations, the matter presumably falls to the Legacy Investigation Branch (LIB) of the PSNI. However, this unit has been found by the Westminster Parliament’s Human Rights Committee not to be sufficiently independent to deal with legacy matters. RfJ agrees with this view.

Furthermore, correspondence from DCC Drew Harris and ACC Will Haire to the judge has also outlined budgetary constraints which have impeded the PSNI in its examination of the De Silva material. In RfJ’s experience, lack of resources has simply become the latest excuse preventing the truth of collusion emerging into the light. Nor can the LIB be trusted to carry out an independent, thorough investigation in a manner capable of leading to the “identification and prosecution of the perpetrators” as required by Article 2.

The Finucanes’ quest for the truth continues. It’s not clear that Judge Ben Stephens proposed route ahead takes us very much further forward.