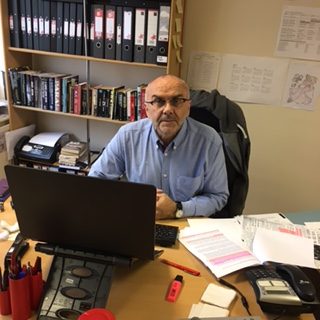 This judicial review was taken by Bridget Hughes, widow of Anthony Hughes, who was killed by the SAS at Loughgall in 1987. Eight IRA members were killed in the incident when they approached an RUC station with a bomb in a hijacked digger. The eight IRA volunteers killed were, Jim Lynagh, Padraig McKearney, Gerard O’Callaghan, Tony Gormley, Eugene Kelly, Patrick Kelly, Seamus Donnelly and Declan Arthurs.  At the heart of the case is the refusal to release funds for legacy inquests in accordance with Lord Chief Justice (LCJ) Morgan’s proposals to address the backlog of inquests over a 5-year period. More than 50 inquests covering nearly 100 deaths remain outstanding with up to another 72 more cases presently being considered by the Attorney General, John Larkin.

The hearing has been taking place in Belfast’s High Court in front of retired judge, Paul Girvan. Barry McDonald QC, represented Bridget Hughes, Tony McGleenan QC, the Secretary of State and Peter Coll QC, the Stormont Executive Office. Over a three-week period, the barristers put forward arguments over who was responsible for the present situation and more importantly who was to blame for the blockage on allocating funds for legacy inquests. The judicial review proceedings were originally against the Secretary of State and the Stormont Executive. However, during the hearing it was argued that the former First Minister Arlene Foster played a central role in blocking the funding to cover legacy inquests.  It was alleged that she was personally responsible for the impasse when she blocked discussion at the Stormont Executive Committee meeting of a Department of Justice (DoJ) paper on funding for inquests. She was then included in the proceedings and was represented by the Attorney General John Larkin.

Setting out the case on behalf of Bridget Hughes, Barry McDonald QC, argued that there was a continuing failure at Stormont and Westminster to allocate money already set aside as part of the Stormont House Agreement. The Department of Justice and the Secretary of State are under a legal obligation to ensure proper examinations into the deaths. The problem is that for political reasons the then First Minister (Arlene Foster) blocked discussion by the Executive Committee of the LCJ Declan Morgan’s 5-year plan to address legacy inquests. The reason Arlene Foster didn’t want them to be heard, claimed Barry McDonald, was because they mostly concerned state killings: ‘she thought there was too much attention being paid to state killings, she wanted more attention paid to the victims of paramilitary killings’.

Tony McGleenan QC for the Secretary of State, claimed that the £150m financial package agreed under the Stormont House Agreement could have been drained by the legacy inquest funding bid alone. The DoJ paper that was up for discussion by the Executive only covered 16 of the 50 cases at a cost of nearly £17m and lacked a proper business model –  he then claimed that funding for all potential legacy inquests could have left nothing of the £150m funding package for other mechanisms to deal with the past.

Peter Coll QC representing the Stormont Executive contended that if the court accepts the applicant’s argument that the Executive Office has a role to play it would amount to a classic case of the departmental tail wagging the ministerial dog. The Executive Office has no say or power to decide what is tabled at Executive Committee meetings.  The role of the Executive is purely an administrative one and, ‘in the final analysis it is the First Minister and Deputy First Minister who decide what is placed on the agenda for discussion’.

John Larkin QC, who represented Arlene Foster claimed that her position on inquest funding was to try and ensure the pot is balanced. He said that NIO emails (revealed during the hearing) showed that the paper (containing DoJ proposals to fund inquests) was undercooked. Arlene Foster, he claimed was concerned about the balance of the overall legacy structures. This, argued Larkin, was an entirely relevant and proper consideration because ‘there’s a limited amount of money for the entirety of the legacy processes’.

Mr Justice Paul Girvan questioned the role of John Larkin in representing Arlene Foster – a position he believed left the Attorney General conflicted. He was also critical of Arlene Foster’s stance on inquests and her refusal to allow any discussion at an Executive Committee meeting on the issue. Stormont’s politicians, the Secretary of State and the British government all came in for criticism by Justice Girvan and how they had allowed the present situation to develop where it seemed nobody is deciding policy or making decisions.

Addressing John Larkin, Justice Girvan asked how he could on the one hand make decisions to grant many of the inquests that are part of this judicial review and at the same time represent someone who has blocked those inquests being held.  Turning to Arlene Foster Justice Girvan said her view regarding legacy inquest funding was a one-sided political viewpoint rather than an adherence to the principles of the law and especially the obligation to hold an inquest under Article 2 (right to life) provisions of the Human Rights Act 1998. Implicit in Arlene Foster’s argument is that legacy inquests are not required by law, yet the UK’s Advocate General (who granted permission for a fresh inquest in Loughgall) has said the inquest into Loughgall must proceed in accordance with Article 2.

Justice Girvan then turned his attention to local politicians, the Secretary of State and the British government where he had withering criticisms of all three. The political institutions at Stormont were ‘dysfunctional and disjointed and operated a system of government where there was no collective responsibility’ he stated.  Turning to the Secretary of State and the British government Justice Girvan was critical of both for allowing the present situation to prevail where it appeared nobody had the power to make decisions.  The present situation is ‘untenable’, either the British government calls a new election to the Assembly or transfers power back to the Westminster parliament. The reality is that there is a lacuna (a gap) in politics here, where nobody is exercising power and the government needs to address this matter.

Closing arguments from Barry McDonald QC, stated that Justice Girvan’s ruling should not solely focus on the illegality of not holding inquests. He argued that the issue of funding for inquests also needs to be addressed and that should be in favour of LCJ Declan Morgan’s 5-year plan and the establishment of a dedicated legacy support unit.  He concluded by saying that he believed in the present political situation the Secretary of State has the power to decide on funding for inquests.

Justice Girvan will now examine all the submissions before delivering his judgement at a later date.

RFJ note re the funding of legacy inquests

It is important to note that legacy is not a devolved matter. The NIO retain legacy as a reserved matter on which the UK government ultimately make all political decisions.

Likewise the devolved department of justice and the executive office, the joint first ministers, do not sign or ratify the European Convention on Human Rights pertaining to Article 2, which includes holding inquests and conducting investigations into killings that must be legally complaint with Article 2.

Carrying out this function is the sole responsibility of the British government as they sign and ratify Convention rights that cover the entire jurisdiction above and beyond all the devolved institutions.

In respect to the North it is the NIO that respond to continued criticisms by the Committee of Ministers to the Council of Europe (CoM/CoE) relating to Article 2 violation findings from the European Court.  It is also worth noting that the CoM/CoE have refused to sign off on their scrutiny and supervision of the UK in terms of ensuring that they meet their Article 2 legal obligations. That is holding Article 2 complaint inquests. Further that supervision has been ongoing since May 2001, which is all revealing.

Therefore the UK Treasury should provide the necessary resources to enable the coroners’ service to conduct inquests.

Further the limited funds set aside for the implementation of the four strands of the legacy architecture agreed at Stormont House should not be depleted as these resources are necessary in terms of addressing the wider issues of legacy relating to approximately between 1800 – 2000 other unsolved cases.