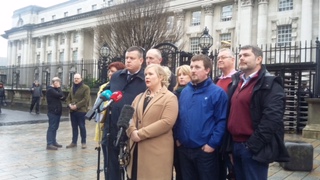 The families of those killed and injured in the Heights Bar have official vindication of the fact that RUC collusion facilitated the murder of their loved ones. A ruling by Mrs Justice Keegan in the High Court, Belfast, this morning also confirms that collusion was a factor in the failure to bring those responsible to justice.

Justice Keegan’s ruling quashed an application by former head of RUC Special Branch Raymond White (on behalf of the Retired Police Officers Association, RPOA), seeking to restrict the powers of the Police Ombudsman to publish the facts and her/his conclusions arising out of investigations into complaints against the RUC.

By implication, her ruling suggests that restriction of the Police Ombudsman’s wide discretion to publish what s/he sees fit to publish would undermine the peace process and the outcome of negotiations that concluded the conflict in the late 1990s and brought about the new dispensation in the north of Ireland.

Adrian Rogan, 34, Malcolm Jenkinson, 53, Barney Green, 87, Daniel McCreanor 59, Patrick O’Hare, 35, and Eamon Byrne, 39 were all killed by the UVF when one of their units pushed open the door of a quiet country bar where the occupants were watching Ireland playing in the soccer world cup in 1994. The killers opened fire with automatic weapons with cruel indiscrimination killing the six men and injuring five others seriously.

The complaint by the Loughinisland families against the RUC handling of the investigation was first lodged in 2001. The matter is now concluded an incredible 17 years later. (While an appeal is possible, such a step would simply confirm the views held by many of Raymond White as someone committed to undermining an important institution of the peace settlement in the north of Ireland. It is to be hoped he will accept the logic of today’s ruling.)

She pointed out that, despite the fact there is no consensus on the definition of collusion and that the fact that it is not anywhere defined in law or as a criminal offence, it is nevertheless “an issue of the utmost gravity” involving “high political and societal stakes”. It is an issue, therefore, that needs to be addressed. The Police Ombudsman is perfectly entitled so to do.

“We cannot emphasize too strongly the importance of the office of Police Ombudsman in the future policing arrangements proposed in this report. The institution is critical to the question of police accountability to the law, to public trust in the police and to the protection of human rights.”

After this powerful affirmation of the function of the Police Ombudsman, Mrs Justice Keegan set out the wide discretion which parliament gave to the institution in its statutory basis. In a withering put down of attempts to curtail its remit, she said: “I am not attracted to a narrow view of the Ombudsman’s functions”.

She was also live to the implications of her judgment for other reports into other controversial cases. Her findings should allow the Ombudsman to carry out the functions envisaged for it in holding the police to account without fear or favour by carrying out independent investigations into current activities and the role of the RUC in legacy cases.

Provided the office of the Ombudsman carries out its functions lawfully, with procedural fairness and was cautious in its use of language when compiling its reports, it now has a wide discretion in how to carry out its work and what to report on.

It remains to be said that the relatives of the victims of the terrible attack at Loughinisland have carried themselves throughout with fortitude, dignity and patience. Their poise is in stark contrast to former RUC personnel seeking to cover-up past failings with a smothering blanket of secrecy.