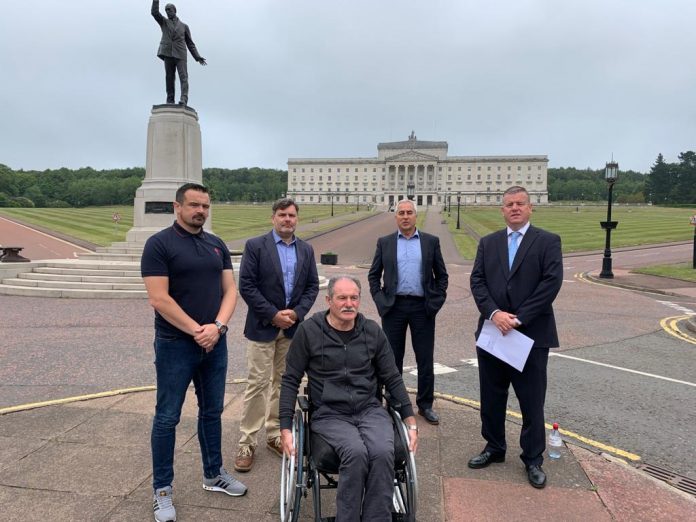 A man left paralysed in a loyalist gun attack in December 1997, an attack that also claimed the life of Seamus Dillion and injured several others including a 15 year old boy, handed a letter to Stormont House for the attention of SoS Brandon Lewis this morning as the Assembly debates the issue of a pension for those injured.

Christy Cummings was left paralysed from the chest down following the attack.

“I worked as a doorman on the evening of the attack along with Seamus and my brother-in-law who was also shot.

“As former republican political prisoners it was the only type of work we could get to put bread on the table for our families.

“We prevented the loyalist gunmen from entering the premises that evening and causing another massacre like that in Greysteel and Loughinisland.

“I think about him and his family all the time.

“In any other society he’d have been publicly and civically recognised as a hero and posthumously honoured.

“I’ve struggled physically and mentally over the years following the attack.

“I live with chronic pain.

“I was refused compensation following the attack as I was a former political prisoner.

“I was sentenced to 16 years for a hoax bomb, which I was framed for by the RUC.

“My case is currently at an advanced stage of the Criminal Case Review Commission (CCRC) and I am confident that my conviction will be overturned.

“Regulations on the payments to those injured contain the ability for widespread discrimination against me and many others injured through no fault of their own.

“The Secretary of State and some commentators have said in the media that this is not the case and that I can apply, which I can but the reality is that I can also be discriminated against and refused and therein lies the problem.

“The NIO has the ability to seek to block an application.

“I may be paralysed but I’m determined to hand deliver the letter drafted by my lawyers to the NIO.

“I want to see a pension for all those injured with no one left behind.

“Since going public I’ve been subjected to some of most vilest online abuse from loyalists and unionists.

“Some commentators and politicians have also argued that I will be eligible and that people in my position should just trust that with good people the right thing will be done.

“Others have argued the Executive should just nominate a department and push people like me out of the way.

“This issue is not about relying on the benevolence and goodwill within the gift of a Board or others to determine if someone who meets the criteria should be awarded a payment if the NIO or others decide that it would be inappropriate.

“On the issue of trust the family of Seamus Dillion, along with thousands of families across the community, were assured within the Stormont House Agreement that there would be independent investigation into killings; not least those killings involving collusion of which Seamus and I were victims of.

“Despite this intergovernmental and all party agreement Brandon Lewis and the NIO arbitrarily tore up that commitment.

“So this isn’t about nice words, platitudes and promises.

“In reality those within the RUC who fabricated my conviction, those who armed loyalists, those who colluded in the attack that killed Seamus and left me paralysed could all apply for and receive this pension whilst there is a separate process for me that could deny it.

“This must be about rights, equality and entitlements.

“I would appeal to the politicians, especially to Brandon Lewis, to get this issue addressed so as there is no scope for any discrimination otherwise the words from him and the NIO on reconciliation ring hallow.”ENDS