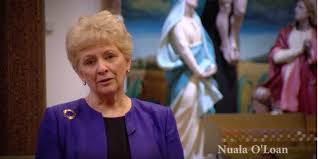 Nuala O’Loan in the House of Lords dismantled the British Secretary of State’s assertion that there would be am investigation in the Police Ombudsman’s office which could address the extensive and grave human rights breaches in relation to the state killing of Pat Finucane. They are worth reading in full:

Lords, there can be no doubt that grounds exist for establishing a public inquiry into the murder of Patrick Finucane. An inquiry should be established because the matter is related to state collusion, leading to the murder, and there are major unanswered questions. As noble Lords know, both the PSNI and the Police Ombudsman for Northern Ireland have said they have no ongoing work in relation to the murder. The work of the police ombudsman, which was referred as a consequence of de Silva, relates to other terrorist murders carried out in Northern Ireland. When I was police ombudsman, I knew that I could not investigate matters surrounding the murder of Patrick Finucane because I did not have the powers. That continues for the current police ombudsman. She can only investigate the activities of police officers. She has no remit to investigate, with a view to prosecution, loyalist paramilitaries, the staff of the Ministry of Defence or the Security Service—that is what is required in this case. Moreover, the police ombudsman does not have the resources to do the work she should be doing; she is grossly underresourced. Yet, as I found when I carried out my investigations, while the crime in question may have occurred decades ago, what emerges from the investigation may have implications for policing today. Do the Government have plans to provide further funding to the police ombudsman to allow her to discharge her statutory duties? It is not a matter of double standards, an inquiry for one and not for the other. It is a matter of learning from the wrongdoing of the past to enable the anti-terrorism work of today.
There are hundreds of unsolved murders, as noble Lords have said. The current system is not working. We urgently need the independent historical investigations unit, which has been promised. It must be properly resourced and needs to do the type of investigation carried out by Chief Constable Boutcher in Operation Kenova. This is not a matter on which the Government can delay; it is urgent. Can the Minister tell us when a new, independent, properly resourced, historical investigations unit will be established?