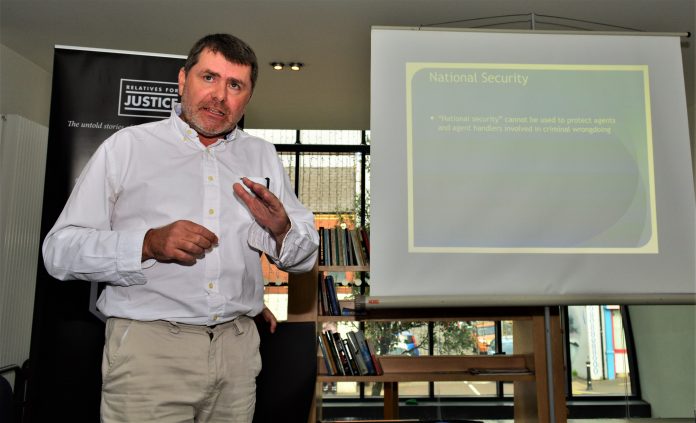 The conflict was characterized by British Government policies and practices of the casual use of lethal force against a civilian population, summary & arbitrary executions, extra-judicial killings and not least collusion. These violations were perpetrated almost exclusively against one section of the community; this constitutes a sectarian campaign by a government through its forces.

367 people were killed directly by the British army and the RUC. The fact that there were only ever four British soldiers convicted for murder is an indictment of the criminal justice system overall during the conflict; not least the role of the RMP and RUC in so-called ‘investigations’. The majority of those killed were civilians. Over 80 were children aged 18 and under. Of those combatants killed many were unarmed. Most were ambushed and killed in preplanned, premeditated circumstances in which safe and effective arrest could have been made but political and ‘security’ decisions were taken not to. This clearly constitutes the violation of the rule of law.

These cases never received investigations compliant with the law, i.e. independent. A fact demonstrated in the Article 2 rulings from the European Court. Evidence and witnesses were routinely ignored. Witnesses were even intimidated. A de-facto impunity existed to protect those responsible and by extension the State. The rule of law was routinely derogated from in these cases.

In terms of collusion the figures demonstrate just under a third of conflict related deaths occurred where collusion was a factor. In our own publication of September 1995, entitled Collusion, we list 229 deaths from the period of 1988 – 1994 in which collusion is evidenced.

Even if we just take a snapshot only of the largest bombings of the conflict like McGurks, Dublin/Mongahan, Shankill and Omagh, these all have evidence of collusion from inception through to intelligence that would have enabled preventability. These atrocities alone witnessed 87 deaths and hundreds injured.

The Glenanne Gang was responsible for 120 killings overall, including the Dublin/Monaghan bombings.

The figures reported publicly in respect to the agent Stakeknife are between 40-50 killings that were preventable.

Lord Stevens, who investigated collusion, told a UK Parliamentary committee in May 2011 that of the 210 people he interviewed, within illegal paramilitary groups and under caution, that 207 were State agents. This provides the scale of control by those who ultimately decided on who would live and who would die. This was at the time when loyalist paramilitaries increased their capacity in an unprecedented way to wage terror and kill mostly Catholic civilians.

It also explains why the Stevens findings have never been made public and why the prosecutions he recommended of 24 members of the RUC special branch and British army intelligence never occurred.

That snapshot alone represents 453 deaths from collusion. This figure does not include hundreds of instances where other bombs killed and maimed, and where people were shot dead.

Relatives for Justice keeps detailed database files on all killings including where families cite evidence of collusion from thematic evidence, to threats made to kill, provision of weapons, failure to properly investigate, to those culpable being protected.

Collusion is why the special branch required shadowy groups such as WERC in order to cover forensic and ballistic evidence to protect their agents. It is why special branch wielded ultimate power under the Walker Guidelines over ordinary police and CID to the extent CID were simply powerless and/or out of fear turned a blind eye. Special branch even permitted the killings of regular RUC officers and UDR/RIR soldiers in order to protect covert human intelligence sources – agents – within republican groups.

So when we see the UK government attempt to wriggle out of its legal responsibilities with regard to the agreed Article 2 compliant HIU; or when we witness the former heads of special branch challenge the Police Ombudsman’s report into Loughinisland thus also preventing the publication of other significant reports into collusion; or the Police Federation, which represents the rank and file of the PSNI, criticize and reject every attempt to independently investigate the past in accordance with the rule of law; or the PSNI challenging families in the courts; we need to recognize that this is a coordinated strategy that is all about keeping the lid closed on the past and shielding the State from exposure with regard to its actions.

It is all about defending the status quo narrative of the past and nothing at all about families, truth, justice, accountability or the rule of law. And this includes protecting those within the RUC special branch that drove the dirty war.

That is why unionists politicians embrace this strategy too as they do not want an accurate accounting of the past that places the State in the dock. They very much prefer to cling to the notion that the State acted within the rule of law with the odd reference that if those who wore a uniform ‘sullied’ it then they too must face the consequences. And then in the same breath qualify such remarks as they join the chorus of those criticizing any attempt to examine the State with a litany of false claims.

The biggest threat to this notion is independent investigations.

There is a certain irony that those most opposed to the application of the rule of law now are the very people who controlled and lectured us all about the rule of law during the conflict – or more accurately the misrule of law.

The only way forward is for Article 2 human rights compliant investigations. The PSNI is not the vehicle for this. The HIU is.

WERC – Weapons & Explosives Research Centre was attached to the special branch. This group had first access to weapons, explosives and other materials that were discovered as part of RUC and British army searches. They, along with the British army’s Weapons Intelligence Section (WIS), oftentimes accessed arms dumps, removed weapons, bugged and replaced them. They also tampered with ballistic and forensic evidence in order to protect their agents. They are now called CIFEx and are attached to the PSNI’s crime investigations and Intelligence units C2 & C3.

HIU – Historic Investigations Unit – an independent investigative unit with full police powers and access to all material evidence and files – agreed by the Irish and British governments, and five main parties, as part of the legacy talks at Stormont House in December 2014.

Walker Report – Guidelines drawing up by Sir Patrick Walker, former head of MI5 in the North of Ireland, on how the RUC should function in terms of intelligence. This gave supremacy within the RUC to special branch where CID could not process prosecutions without the consent of special branch. This enabled an assessment to be made as to the value of an individual and whether or not they could be recruited instead of being prosecuted.

Article 2 – Article 2 of the European Convention on Human Rights (ECHR) is the Right To Life. Signatories to the Convention, of which the UK are, are legally obligated to; (i) take every conceivable measure to protect and preserve life; (ii) that States can only take life in very exceptional circumstances where the force is no more than absolutely necessary with regard to law enforcement authorities; (iii) that when life is taken, and not least by the State or where evidence of State complicity i.e. collusion exists, then there must be prompt, independent and effective remedy by way of investigation to establish the facts and where evidence is found of wrongdoing then those responsible held to account and punished.