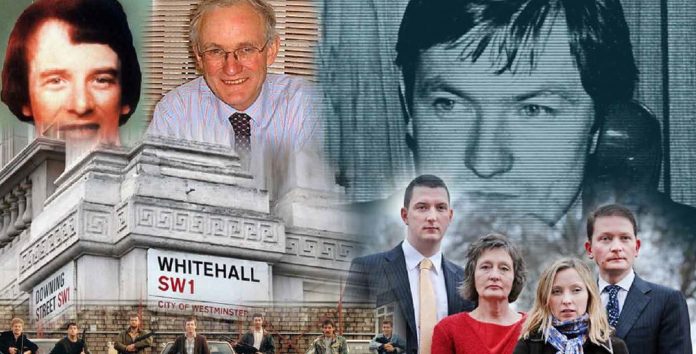 Lord Justice Gillen – sitting along with Mr Justice Deeny and Mr Justice Horner – today dismissed an appeal by Geraldine Finucane against Mr Justice Stephens finding in a lower court that the government do not have to establish a public inquiry – as they promised at Weston Park in 2001 – into the murder of her husband Pat in 1989.

Despite this undertaking having been given to the local political parties, the Irish government and the wider public, according to Gillen LJ, this was not a binding promise and circumstances could change it. Essentially, the Appeal court bench considered the points raised by Geraldine’s lawyers in their critique of the earlier judgement, reviewed what Stephens J had said, and – on virtually every point – confirmed the findings of the lower court.

This is a very disappointing outcome for the family and for anyone concerned with ensuring the British authorities, its police and its spooks should be held accountable for their crimes.

This is particularly so as Gillen LJ laid out in some detail the context of British state agents conspiring to and then carrying out the murder; then other officials wilfully obstructing the series of investigations and inquiries which examined the circumstances.  He also outlined some of the shocking findings of the most recent document-based review – resulting in the de Silva report – which provided yet more evidence of collusion between the state and loyalists.

Nevertheless, the Appeal Court bench could find no fault in how the lower court came to its conclusions. Notwithstanding the public interest in getting to the bottom of what happened and the promises of the British government – including to a neighbour government – and despite an accepted legitimate expectation on the part of the murdered victim’s family in seeing that promise fulfilled, Gillen LJ accepted that the British government was being reasonable in citing cost as an excuse for not fulfilling its promise.

While the ruling is a blow to the family’s campaign, they have said that the promise of a public inquiry remains “Unfinished Business”. They will study the lengthy judgement to assess whether to take an appeal to the Supreme Court in London. They will also assess comments by Gillen LJ and also by Deeny J concerning the fact that the de Silva findings seem to have “re-activated Article 2 (the right to life arising from the Human Rights Act 1998)” in this case.

Though the family were not content with the decision to appoint Desmond de Silva as an alternative to a proper Public Inquiry, he nevertheless saw more material than had ever been seen by previous examinations (Stevens 1,2 and 3, or Cory). These matters had prompted a further police investigation which would conclude “within weeks”. This, Mr Justice Deeny appeared to suggest, meant that final consideration of what obligations arise under Article 2 to secure a prompt, independent investigation capable of identifying and prosecuting the perpetrators, cannot yet take place.

In any event, Deeny J. also pointed out, when – in 2009 – the Committee of Ministers of the Council of Europe closed their supervision of the European Court’s judgement against the UK government in the Finucane case, they did so on the basis that a public inquiry would be held. Instead, the de Silva document review is all that has taken place. This could by no means be seen as an Article 2-compliant investigation. The consequent police investigation will lead to a report to the Director of Public Prosecutions. Once this process is completed, Europe may have more to say on the matter.