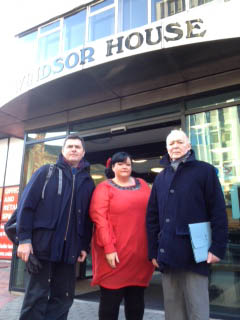 Today the Director of RFJ Mark Thompson accompanied the family of Thomas and John McErlane, killed by UVF in 1975  in a meeting with the Victims Commissioner Kathryn Stone.

The family, supported by Relatives for Justice, are calling for more robust approach by the PSNI and Public Prosecution Service concerning sectarianism and additional legislation aimed at curbing this vile behaviour and holding to account those making such comments.

Following the meeting Mark said that the meeting was good and the Commissioner was very empathetic and supportive of the family.

The Commissioner said that the family had experienced a ‘terrible wrong’  and had ‘conducted themselves with great dignity.’

The Commissioner has agreed to contact the PSNI concerning threats and Facebook comments aimed at the family adding the Commission’s voice to the need for this to be fully addressed.

The Commissioner made other commitments which at this stage will be followed up on.

The meeting was very positive and productive.

Speaking afterwards Seaneen and Gerry McErlane said: ‘We are delighted with how we were received and of the very supportive and encouraging approach of the Commissioner. The Commissioner will also undertake to follow up on specific requests we made,’