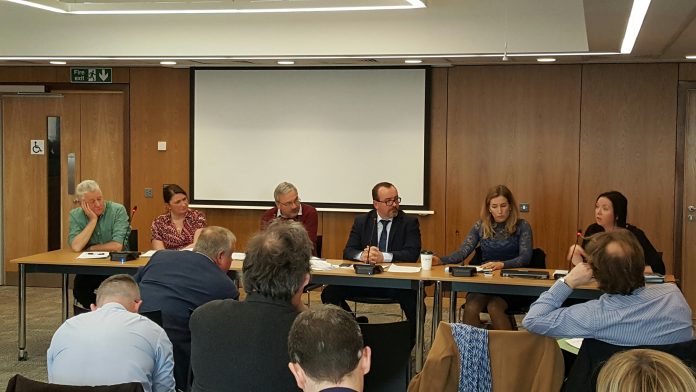 On the morning of the 4th April 2017, a document was publicly launched in the Law School at Queens University, Belfast which proposed a way forward on the question of national security and disclosure to families in respect of investigations into conflict related deaths.

This issue has been at the heart of stalled discussions on the implementation of the Stormont House Agreement. The British government proposals in 2015 amounted to what Charlie Flanagan described as a “smothering blanket” which would have prevented all but the most banal information from emerging. In response, Sinn Féin had proposed an independent appeal process which would take final decisions on what could be disclosed away from the British Secretary of State and – by implication – British security interests.

The document launched today was aimed at a pragmatic resolution of the impasse. It proposed a set of principles and processes which might cut the Gordian knot which has prevented the establishment of the legacy architecture which has been awaited for so long.

After presentation of the technical details, RfJ’s Andrée Murphy joined a panel comprising the groups that developed the proposals. Also present were the Committee on the Administration of Justice, The Pat Finucane Centre and academics Professors Anna Bryson and Kieran McEvoy.

Questions from the floor probed issues such as:

Andrée pointed out that the proposed model is more restrictive than RfJ would have liked but nevertheless, in the hope of finally seeing the Stormont House institutions up and running, something like what has been developed may move us forward. She also stressed that these issues are not unionist or nationalist. Rather they are based on international human rights norms and arise from judgments of the European Court of Human Rights in cases brought by relatives of loved ones killed by the state during the conflict here.

RFJ Remarks to the US Congress Tom Lantos Commission on Human...