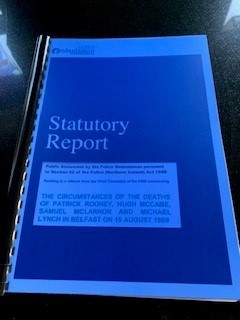 Statement issued by Relatives For Justice on the occasion of the Police Ombudsman’s public statement on RUC killings in August 1969.

The Police Ombudsman’s investigation into four deaths committed by the RUC during public unrest in August 1969 – named Operation Banister – has finally been completed and published. It has taken too long and, like other reports, has been delayed by the action of the organisation (NIRPOA) representing former police officers, which challenges every move by the Ombudsman to scrutinize RUC actions during the conflict.

In seeking to protect the reputation of the RUC, the NIRPOA seeks to maintain its record of impunity for wrongdoing, which has added implications for current policing arrangements.

Relatives For Justice welcomes the findings of the Police Ombudsman that the RUC preparation for and response to community disturbances in Divis and Ardoyne in August 1969 was fundamentally flawed and that the actions of RUC officers on the ground was reckless. She has also been highly critical of the fact that no police investigation whatsoever was undertaken into four deaths. Given these findings, it now falls to the current Chief Constable to respond.

The deaths of Patrick Rooney, Hugh McCabe, Sam McLarnon and Michael Rooney at the hands of the RUC in August 1969 was a watershed moment for nationalists. Their violent actions confirmed for the nationalist community that, apart from being sectarian, the RUC were prepared and willing to fire indiscriminately at Catholics and in Catholic districts with fatal consequences.

From RUC attacks on civil rights marches, the invasion of the Bogside by the RUC and the death of Samuel Devenny, the ambush at Burntollet Bridge, through to Bloody Sunday showed Catholics and nationalists what they could expect from the Unionist and British State. None of the police officers who fired bullets in August 1969 faced investigation or prosecution for their actions. Instead, they conspired to hide the facts of the shootings and covered up for the culprits.

The deaths were examined as part of the Scarman Tribunal which strongly criticised the RUC officers involved in the death of Patrick Rooney, called the killing of Hugh McCabe “justified”, and invoked uncertainty (“All else is unclear.”) in respect of the deaths of Michael Lynch and Sam McLarnon in Ardoyne. This was an unsatisfactory response which did little to reassure the victims’ community. The families have never accepted that the RUC did anything to bring the perpetrators to account for the murder of their loved ones.

It is for this reason that a proper independent police investigation, willing to question still-available former officers under caution, with up-to-date forensic and other police techniques was necessary, even with the passage of time – 52 years. While the difficulties in such an exercise are outlined in the Ombudsman’s report, nevertheless, at least in two of the cases, files were considered by the Public Prosecution Service, though in the end no prosecutions were taken forward.

It is an example of why the British government’s current plans to circumvent the criminal justice system in respect of conflict-related killings (especially those committed by RUC officers or British soldiers) are misconceived, as well as being in breach of international human rights obligations.

Families deserve a proper, thorough, independent police investigation when their loved ones were killed in disputed circumstances. It is the record of the authorities during the conflict in failing to investigate State killings which means that independent investigations are still required.

RFJ has supported the families affected by these events and pays tribute to their courage and dignity during the long wait for this report. We will continue to support any who wish to continue seeking justice where the conclusions of the Police Ombudsman are found to be unconvincing.