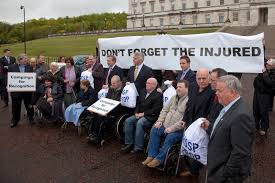 Relatives for Justice has seen the British Government’s regulations for payments to the injured of the conflict.

Our organisation supports a payment scheme for the injured. It is long since past time that the injured of the conflict were afforded the dignity of acknowledgement and support. This should have been a positive day. However, instead, these regulations hold the potential for the creation of significant harm to many victims and survivors.

The British Government has used this legislation to promote their own partial narrative of the past, and run a coach and horses through the 2006 Order’s definition of victims, a definition which has served our divided society well to date. This Bill shamefully introduces a hierarchy of victimhood.

The Bill provides for the establishment of   “an independent (sic) Board… to oversee the scheme… (who) will have discretion to withhold a payment where they consider it appropriate to do so because of an unspent serious criminal conviction, or in exceptional circumstances (having regard to material evidence).”  The aim of the establishment of such a Board is: “ a mechanism for deciding whether a conviction or, exceptionally, other evidence means that it would not be appropriate for a person to be entitled to an award through this scheme.”

This language will send a shiver down the spine of many who appreciate the complexity and contested nature of our conflict, and who have worked diligently who promote healing in a divided society.

That this scheme has been developed and designed in Westminster with no appreciation of the complexity of our conflict informs the contents of this Bill. That it will be funded and administered through Stormont holds the potential to undermine confidence in the devolved bodies just as they are re-established. This is pernicious in the extreme.

That the Bill proposes to take the payments’ funding from the monies put aside for the Stormont House Agreement legacy infrastructure in the Block Grant means that victims’ rights to acknowledgement, truth and justice are being played off against the need for a scheme for the injured. This only adds to the cynicism and disregard on display.

The insufficient nod to the needs of the bereaved of our conflict who are once again disregarded, while taking no responsibility for the disparity that this scheme will create between the bereaved and injured adds to the insult of an insulting and ill thought out piece of legislation.

We note that “the intention is to make progress regarding victims and survivors and advance the wider process of reconciliation”. As such it fails spectacularly in its intention. What is consistent is British bad faith.

We are calling on the Stormont Assembly to bring to bear its own power as the administrators, working towards a more representative and inclusive payment scheme rather than this deliberate and pernicious promotion of division and harm.