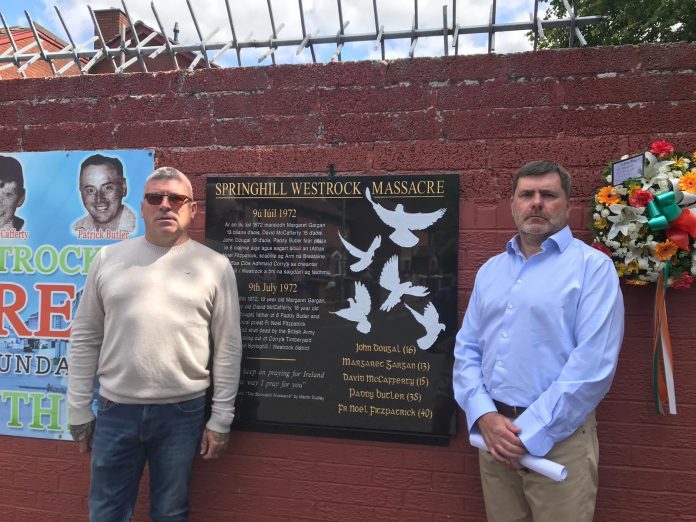 I want to firstly commend the families for their determined persistence and resolve to address what was an act of state terror against an unarmed civilian population; a cowardly act of terror that claimed the lives of three children – John Dougal, Dee McCaffrey, and a young girl, 13 year old Margaret Gargan – a father of six, Paddy Butler and a parish priest Noel Fitzpatrick, both going to the aid of those dying and injured.

I want to commend those injured for their selfless acts of extreme courage and bravery who, in the face of grave danger, aided the wounded and dying in those dreadful hours. Commend too those who opened their doors and did what they humanly could, who in stark contrast to state aggression, showed humanity and compassion. And to this community that stood with those bereaved and injured 47 years ago – a community that today still stands here with the families and survivors.

That you have succeeded in reopening the inquest is testament to your determination and resolve to right a terrible wrong – a terrible injustice – and to address decades long state impunity for state terror. We all stand with you and so should all right thinking people on this island and beyond, regardless of their religion or politics, who profess to be concerned with rule of law, human rights, peace and moving forward on our island.

However, instead, we witness daily the unashamed hypocrisy concerning state violence from certain quarters.

I want firstly to set the Springhill atrocity into a wider context – that of attacks that resulted in multiple murders perpetrated in places such as Ballymurphy, Derry on Bloody Sunday, Springhill and the New Lodge – all from August 1971 to February 1973, all by the British army; and numerous individual killings too that occurred.

This assault on our community was an attempt to subjugate, demoralize, and ultimately defeat this community. But it failed.

The use of special ‘security’ measures, resourcing, developing and driving military policies for this purpose all had political oversight and sanction – they did not occur in a vacuum. Corrupting the rule of law in order to achieve these key aims was a prerequisite. Long tested British colonial practices from elsewhere across the globe which saw similar horrendous barbarity, were applied here too from the use of pseudo murder gangs, direct state killings, torture, internment camps, special courts, the suspension of the administration of justice and abuse of power.

The British army mission in the North, Operation Banner, was to defeat the IRA – not loyalists. Viewed through that lens is how we should examine our recent history and what happened to our community – what happened here in Springhill.

A glance at this 1972 document on British State Impunity as Policy shows any independent observer exactly what was happening. The indemnification from persecution of state forces as they shoot and kill people from our community – working closely with the UDA, which were also killing Catholics. Blaming republicans.

State impunity was the order of the day.

The quest – the human drive of those bereaved and injured – for truth and justice never diminishes in the face of aggression and injustice. It only strengthens resolve, as demonstrated by the families and survivors of Springhill.

You, the bereaved, are the voice of those so cruelly taken. You speak for them and you have been heard loud and clear – of that you can be proud – your loved ones have a voice through you.

A lot has been achieved collectively in terms of legacy. But there is a bit still to go and battles ahead.

We recognize the trauma caused and heartache of loss and that the time ahead during the inquest will be demanding too – we are all here with you and for you whenever required.

I want to address some areas of the negative reactions to the demands around legacy when concerning state violence and collusion.

State actions, murder with impunity, fuelled, sustained and prolonged the conflict – (this was indeed referenced by Lord Stevens concerning just the matter of collusion he examined).

The hypocrisy of political unionism as they moralize about the conflict and of who was right and who was wrong – who is deserving of the status of victim – the talk of ‘terrorism’ whilst ignoring what state engaged in needs to end.

We witness regularly too the destruction and concealment of files regarding state murder by the MoD and the PSNI. An example was even the guns used in Bloody Sunday being destroyed just weeks before the inquiry commenced.

The PSNI are fighting families tooth and nail in the courts in vicious challenges in order to block truth and justice, they’re really protecting the RUC. George Hamilton, when in charge, talked constantly about the need to deal with the past but his actions told us otherwise.

Then we have the continued assault on the Police Ombudsman including by former RUC officers from the very special branch organisation under investigation by that office as they use every conceivable means from court challenges to withholding and cutting funding all to prevent that office form examining their actions.

We’ve had the arrest of journalists who exposed collusion and a state agent in the Loughinisland massacre whilst the PSNI ignore the murder of six men and the wounding of more as this state agent enjoys impunity.

We’ve had the continued court battles by the PSNI to try and stop 120 plus families whose loved ones were killed by a group of RUC, UDR and loyalists (Glenanne gang) who rampaged across Mid-Ulster causing that much human carnage the area was dubbed ‘the murder triangle’.

We’ve witnessed the withholding of funding for legacy inquests, the political decision by the DUP leader Arlene Foster in denying funding being adjudicated on in the courts as being found to be politically unlawful.

There’s been the hiding of thousands of sensitive files by the PSNI relating to hundreds of collusive attacks including in scores of murders, which has, along with the attacks by former RUC members through the Retired Police Officers Association (ROPA), halted reports into collusion by the Police Ombudsman.

The legacy mechanisms agreed at Stormont House in December 2014 have been held up since 2014 with the British government arbitrarily inserting of national security veto to further shield their activities.

We’ve waited on a consultation on the legacy agreement that only took place last year and this week appears again to be in cold storage, despite the findings clearly stating that the legacy mechanisms agreed need to be implemented and that there is no support for an amnesty.

The findings also say that the delaying tactics need to stop and that resources for PONI and legacy inquests must be provided – that message is crystal clear.

Amnesty – Whom does it benefit? It only benefits the state forces and their allies who have enjoyed impunity for their actions.

The way forward is clear for all – the resistance to the rule of law and promotion of rights from Westminster, from the DUP and others, needs to end.

The overarching context of these actions is to defend the state narrative that is threatened only by truth and accountability – threatened by the rule of law we were so often lectured about for decades during the conflict, when it suited. That is why they contest everything on legacy.

It is all about the stealth of stifling independent investigation masked in propaganda and misinformation about exactly who are the victims, who were the ‘terrorists’, and that requires the law to be undermined and rights denied in order to maintain a skewed narrative and continued impunity. This must end.

The terrorism experienced in our community came from the barrel of a gun held by someone in a state uniform.

We should take hope in the bleak landscape in which the reactions to demands for truth and accountability regarding legacy and the surrounding politics unfold.

Legacy is at the centre of the entire criminal justice system and politics – it is not on the outside looking in. That is down to us, the families and our community, working together.

Finally we want to send a clear message to the new PSNI Chief Constable and any incoming British appointed Secretary of State – stop prevaricating, stop stalling, stop blocking and preventing truth and justice. Legislate for and implement the Stormont House Agreement legacy mechanisms. Hand over the files, assist the processes of justice and the rule of law and stop defending the indefensible by defending the RUC and British army and their actions. 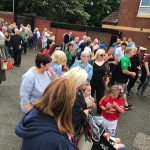 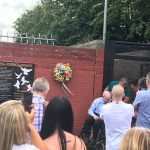 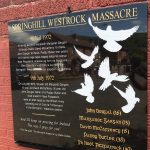 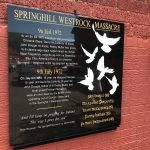