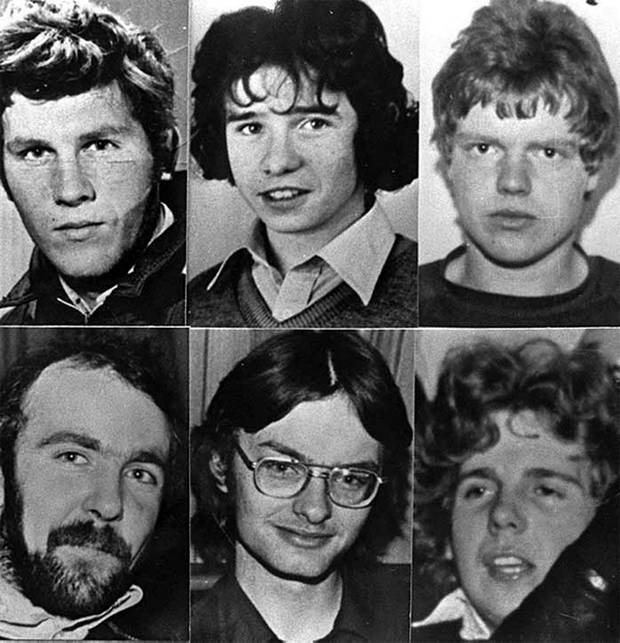 I spent this morning in Old Town Hall Court House where the Coroner again held yet another preliminary inquest hearing into the RUC killings of five republican men and a nationalist teenager in 1982 in what has become known as the shoot-to-kill cases. All were unarmed and deliberately killed and then the circumstances of their killings fabricated by the RUC to somehow ‘justify’ the shootings.

The inquests were reopened over 6-years ago after being indefinitely suspended in the late 1980’s when the families and the late Pat Finucane, including his law practice partner Peter Madden, began to challenge and expose investigative failings.

John Stalker, one Britain’s most distinguished police chiefs, was appointed to examine the killings after international pressure mounted for a public inquiry into the killings. However, Stalker set about actually doing his job and searching for the truth basically saying that there was a shoot to kill policy in these deaths.

He was however removed by the British government and replaced by another senior British police chief, Colin Sampson who completed a report known as the Stalker/Sampson report. This has never been published.

In 1988 the then British Attorney General, Sir Patrick Mayhew, provided an amnesty to RUC officers who admitted in court in 1984 that they had lied about events acknowledging they had been ordered by senior officers to lie about the circumstances of the planned killings.

It was only following significant rulings by the ECHR in May 2001 and the resulting changes in how inquests were to be now conducted that the Coroner decided to reexamine these particular killings.

Lawyers for the PSNI Chief Constable told the inquest hearing this morning that it may take until 2016 to conducted an analysis of all the underlying material in the case before the inquest can start. The people vetting the material within the PSNI are former members of the RUC’s Special Branch. This is totally unacceptable as they have direct links to the people who both ordered and carried out the killings. Further they have successfully sought public interest immunity certificates preventing the disclosure of the material to the court.

A few years ago I sat in the court when the Coroner John leckey said that he had viewed some parts of the Stalker/Sampson report and from what he had seen decided to reopen the inquests into the three RUC men killed in an IRA landmine attack in October 1982, an incident that occured several weeks prior to the three shoot to kill incidents.

It appears that possibly the landmine was removed from an IRA arms dump that had been bugged by RUC Special Branch and MI5 yet this was somehow permitted and the three RUC members were then killed with it.

So this morning we heard of more obstruction, prevarication and delay in handing over material in which nine of the most controversial killings of the conflict are the subject of an inquest. In the last several months the parents of Seamus Grew have died, as has the mother of teenager Michael Tighe. Teresa Carroll is in her 80’s and also lost another son in the conflict. The wider Grew family also had multiple deaths in the conflict. We also heard from lawyers representing the three RUC men say that the families’ hopes for the truth about what happened had been lifted by news that the inquests would be reopened only to be dashed by delay after delay. Truth is required for all the families.

We also heard from the Coroner who was totally sympathetic to the needs of families, the undue delays and passage of time with ageing relatives and the need for the government and chief constable Matt Baggott to comply with their legal obligations and provide the material. In that respect he said that numerous complex inquests in England have been concluded in the timeframe it has taken this one to get started.

Lawyers for the families argued that the chief constable is deliberately stalling and obstructing the inquest.

We also heard calls in the court for the PSNI chief constable to be called to the court to explain his delaying tactics.

RFJ have called for both the chief constable and the Minister for Justice, David Ford, to explain the situation. Maybe the Justice Committee could hear from the families and lawyers too and ask the necessary questions of the pair.

Oh and while this was all taking place in the court next door lawyers for the chief constable were trying to prevent a judicial review of the PSNI and HET from taking place in the British Army killing of Stan Carberry regarding the HET failure to properly investigate that killing. The chief constable now claims that he could independently, yes you read that right, independently investigate the killing. Such contradictions.

Paul Butler from RFJ accompanied the Carberry family who are seeking an injunction to prevent the PSNI from further covering up this shambles from being exposed to judicial scrutiny post the damning HMIC report into the HET – the HET that was under the control and direction of the chief constable.

Come on Matt your antics are fooling no one – and yes the political policemen on your back – the very people driving this through you need to also step back and stop this nonsense too. Justice delayed – justice denied won’t work the truth will out – families have a right to know and the more you prevent the more wider society judges you all by your disgraceful actions….