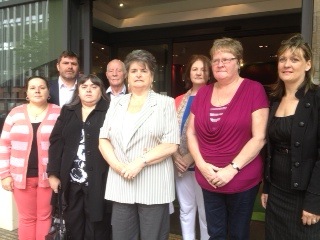 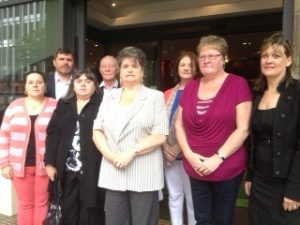 “HET Perverted the Course of Justice in State Killings”

Speaking today from Belfast following a private meeting between families and the HMIC who delivered their report on the Historical Enquiries Team, Relatives for Justice Director Mark Thompson has said

“The report today by the HMIC is damning. It is clear that the HET operate with no policies, no procedures and no terms of reference. However in particular the treatment of victims of state violence is shameful.

“Today’s report outlines the substandard, non-compliant examinations of deaths by the HET in these cases. It outlines to families how once again British soldiers have been protected from prosecution.

“Today we know that the HET, under direction from the PSNI, did not act legally in examining state killings, and in our view after hearing the findings on the methodology and approach, did pervert the course of justice.

“The Minister for Justice David Ford and the Policing Board must move to immediately scrap the HET. The Minister, with the British Secretary of State Teresa Villiers, must now stop prevaricating and pave the way for creation and establishment of an independent, Article 2 compliant mechanism to properly investigate all state killings. The Irish Government must have an equal input to that process and must lend its weight to ensure its establishment on behalf of the Irish citizens whose lives were taken and whose families still mourn.”

The full report by the HMIC can be found on this link http://www.hmic.gov.uk/media/inspection-of-the-police-service-of-northern-ireland-historical-enquiries-team-20130703.pdf