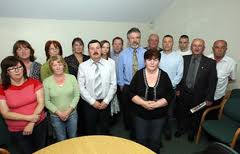 The long awaited announcement today that the police investigation into the murders in Derry in January 1972 known as Bloody Sunday will commence in the new year will prompt families from across the North to contribute to their investigation.
In 1971 and 1972 the British army’s Parachute Regiment murdered civilians with complete impunity. In August 1971 they murdered 11 civilians, including a mother of 8 and the parish priest in Ballymurphy, West Belfast.
Not only was no one held to account but lies and smears covered up the killings, even while the bodies still lay on the ground, before families knew of the horror that had occurred.
They murdered and maimed without any fear whatsoever that they would be investigated let alone prosecuted.
For us to really understand why and how the Parachute Regiment did what they did in Derry in January 1972 and how history was irreversibly changed we need to examine the murders and injuries which preceded them.
Just as the historic police investigations into Jimmy Saville did not stop with one incident and a whole pattern of abuse and cover up is being investigated, so much much more must an investigation into the murder of citizens on their own streets be examined as widely and inclusively as possible.
This is a real opportunity for a proper and effective investigation to make a real difference.