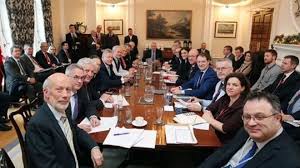 The recent political agreement has rightly been described as a ‘heads of agreement paper’ with important key broad themes being agreed in which the finer detail has yet to be finalized.

The headings in the agreement certainly provide opportunity for families seeking accountability for violations. We want this to work and deliver for families.

The full text of the Agreement can be accessed by clicking here https://www.gov.uk/government/uploads/system/uploads/attachment_data/file/390672/Stormont_House_Agreement.pdf

However, in terms of maximizing this potential for families the devil will be in the detail. There remains a huge amount of work in the year ahead not least around the following areas:

The fact that we finally have an agreement is in no short measure down to the work of families supported by key NGOs including the Pat Finucane Centre and Relatives for Justice; the refusal to let the truth be buried.

The task of ensuring that a human rights compliant framework is put center-stage has been the foundation of our overall approach to addressing the past. The recent visit to Belfast by Human Rights Commissioner for the Council of Europe, Nils Muižnieks, certainly endorsed that message when he stated that the UK Government could not side step its human rights obligations concerning accounting for past violations. He rightly stated that the UK was acting with impunity and that this needed to end. Addressing the legacy of impunity must be at the heart of this new agreement and RFJ will certainly endeavor to ensure that this is the case.

Within the talks it was immediately evident that the British Government wanted a process that was quick with less scrutiny and accountability, less public and cheap. They also wanted the only available mechanism to families, inquests, that are transparent, participative, have the ability to access all the documents, witnesses and importantly where lawyers representing families can question those responsible for killings. Inquests have the very real potential to hold the State to account and they did all in their power to ensure that inquests were shut down.

RFJ lobbied continuously in the weeks running into the agreement meeting regularly political parties and government and pressing our analysis and what was required.

To their credit both Sinn Féin and the SDLP held clear red lines such as ensuring that inquests were not closed down to families; that any emergent process to deal with the past was independent and Article 2 human rights compliant; and that it was sufficiently resourced. These are crucial to the agreement and are in place within the headings. And with £150 million allocated to the addressing the past this is encouraging.

There are three strands to the past; an Historical Investigations Unit (HIU); a Independent Commission on Information Retrieval (ICIR); and an Implementation & Reconciliation Group (IRG).

The HIU will have full police powers conducting investigations into conflict killings. Importantly this will include re-investigating all killings by the British Army including those for which the HET deliberately failed families in their flawed, illegal, approach to these particular killings. The HIU will also take responsibility for cases currently within the remit of the Police Ombudsman.

RFJ will support and make a case for any family seeking to have their case examined whether or not the HET, Ombudsman or any other body had previously examined it.

The unit will be human rights complaint. Legislation giving effect to this unit will be brought before the British parliament. And this is precisely where the detail and attention needs to be paid in terms of the above points.

Importantly our colleagues in the Committee on the Administration of Justice, (CAJ) along with leading QUB academic, Professor Kieran McEvoy, have been working on a project examining legislation based on the Haass/O’Sullivan proposals of last year. Undoubtedly this will also be useful in this instance.

Our view is that the more people involved across a range of disciplines in ensuring the success of this agreement the better and stronger it will be for families and consequently society as a whole.

The ICIR is where families can privately seek to discover information about the killing of a loved one and where prosecution would not be an option. The ICIR will require legislation within both jurisdictions and run for a 5-year period. Information provided to it will not be shared with law enforcement agencies. This body will work similar to the current body on the disappeared, the Independent Commission on the Location of the Victim’s Remains (ICLVR). This will be led a by a panel of five people including an independent chairperson possibly of international standing. Both governments will appoint this chair. Sinn Féin and the DUP will each make an appointment and then in consultation with OFMDFM the two governments will each make one appointment.

The IRG will consist of 11-member panel appointed by both governments and all the Executive parties. The IRG will examine themes emerging from the previous two mechanisms, the HIU and ICIR, reporting after a 5-year period. This too may report on the levels of cooperation by all the combatant groups and agencies within the overall process. The main aim will be to establish themes, learn from and promote reconciliation.

In addition there will be plans for an Oral Archive and a comprehensive trauma service based within the NHS and crucially working directly with groups delivering frontline support services to victims and survivors of the conflict.

The real test of the agreement is its ability to have families visualize themselves within the proposed framework and where it delivers for them notwithstanding the absence of finer details.

We would certainly encourage families to read the document and familiarize themselves with it; interrogate it and ask the questions.

RFJ will monitor and scrutinize its implementation including tracking the various stages of draft bills through to final legislation.

If any family seeks clarity and wants to discuss any aspect of the agreement we would urge them to contact us.