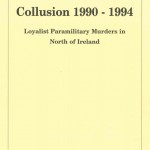 Today’s Guardian has an exclusive piece by Ian Cobain drawing on his research involving Relatives for Justice.

Relatives for Justice was the first organisation to link the 1987 shipment of weaponry to loyalism with the massive increase in killings by loyalist actors. In the seminal work Collusion 1990-1994 the victims of these weapons are listed in full. Following publication of this report the RUC stopped making available forensic and ballistic information following killings. COLLUSION REPORT 1990 -1994

The article by Ian Cobain and RFJ documentation proves conclusively that the British government bear the responsibility for the murder of hundreds of people. Catholics, and Protestants.

It is a matter of huge public interest that a full independent public inquiry into the arming and directing of loyalism by the British state take place.