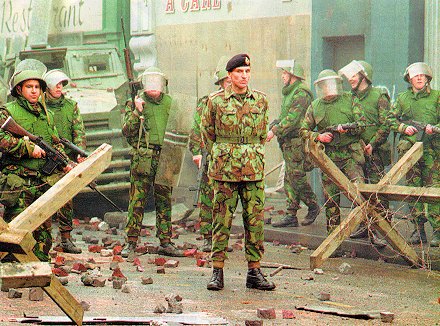 We have this morning read the statement to be delivered today in the House of Commons by British Secretary of State Brandon Lewis.

Throughout the statement the British government abuses terms and phraseology associated with our transitional process of building peace and reconciliation to cloak its evident malign intent.

The statement is disingenuous and insulting to families who have been denied justice since the killings of their loved ones. In particular, the British government has spent the past two decades trying to evade and wriggle out of its legal obligations under Article 2 of the European Convention of Human Rights when faced with its failings to properly and independently investigate killings it carried out during the conflict, including those in which there was State collusion.

It is clear in this statement that the British Government is trying to get away scot free from its role in the conflict. This will be resisted and challenged.

Mr Lewis’ government has an international legal obligation to thoroughly, and independently investigate killings which its forces carried out directly, and where they are implicated in colluding with illegal organisations. Families and NGOs have had to continuously use the European Court to seek remedy due to the UK’s failures in this regard. The European Court and its enforcement body the Committee of Ministers have refused, since May 2001, to provide the UK with a clean bill of health in respect to how it conducts investigations in the North of Ireland regarding State killings and collusion.

In 2014 the British Government signed up to the Stormont House Agreement. This was an inter-governmental agreement with the Irish government and the five local parties which agreed to implement an historic investigative unit to investigate all outstanding killings where there had never been proper investigations. This mechanism meant that for the first time the British government would potentially meet its legal obligations to the families of those they had killed directly and indirectly. Since then representatives of the British government has repeatedly pledged to international legal bodies, the United Nations and the European Court, the commitment to provide for legally compliant investigations to be carried out by a HIU.

The British government consulted on the Stormont House Agreement in 2018 and received over 17,000 responses. The majority of those responses supported the full implementation of the HIU.

However, today we realise that rather than meet its legal obligations, the British government has once again moved the goal posts to protect those within its armed forces and those within illegal organisations they colluded with. Its ultimate aim is to prevent the truth from emerging about its role in the conflict.

So-called investigations carried out by the British government to date have been perfunctory and lack compliance with the law. For victims of State violence and collusion there has never been a single legally compliant investigation. The assertion of continuous re-investigation is a fallacy.

Presenting these issues with the competing interests of protecting veterans while giving victims reconciliation and giving society what it needs, is poor camouflage for continuing immunity and impunity. People will see through such cynicism.

These measures will further deepen divisions in society and will certainly not aid any measure of reconciliation – they will aggravate existing hurts and wounds and will be seen as further evidence of systemic cover up of British State crimes. This will be challenged on every level by families and not least in the domestic and European Courts.

In parallel these measures will further erode confidence in policing and the administration of justice, the very opposite of what the British government claims it is seeking to do.

But in reality, none of the above are issues which this Conservative government care for. Their only consideration is protecting their State regardless of the consequences.

The sad reality of that is that this buys the British government more time as elderly relatives and others pass away. Bringing these measures forward in a time of global pandemic is beyond cynical and opportunistic, but in keeping with this Government’s dismal track record on legacy and victims.

“Not only must Justice be done; it must also be seen to be done.”