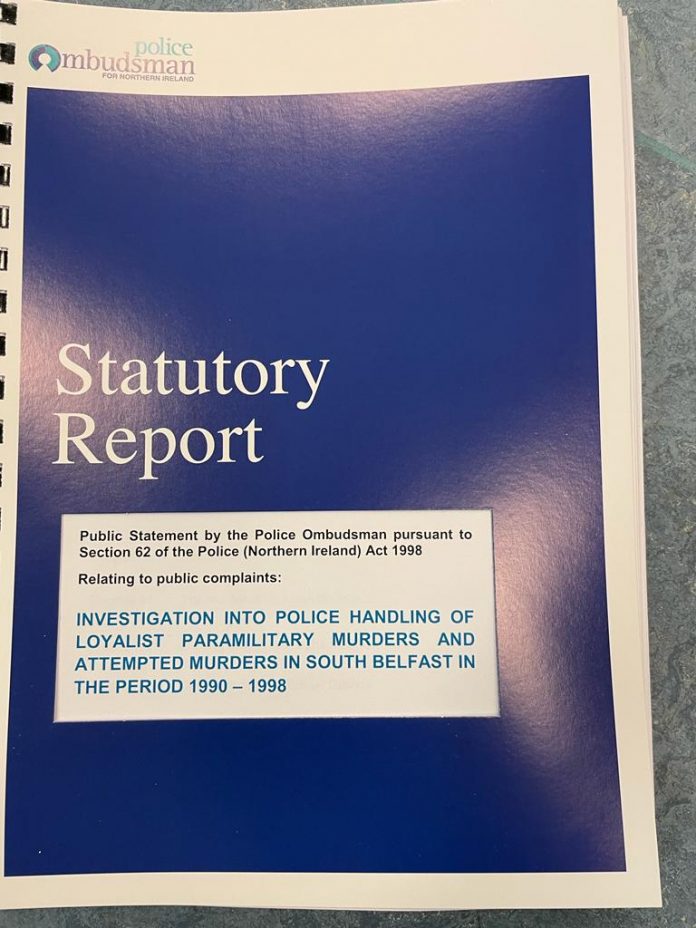 Press Statement on behalf of Relatives for Justice and KRW Law

Families mentioned in the Police Ombudsman’s investigation into police handling of loyalist murders and attempted murders in South Belfast 1990-1998 were tonight beginning to come to terms with the Police Ombudsman findings that their loved ones were killed as a result of collusive actions between the British state and paramilitaries in the UDA/UFF. The Police Ombudsman has upheld their multiple complaints of collusion in each and every case.

The report finds that eleven murdered citizens and their families were systemically failed by the British state in life and in death. It is a damning report that is undiluted evidence of the policy of collusion as it was practiced in South Belfast, and across the North.

It is of critical importance that we read this report in the context of previous reports into the killing of Damien Walsh, the killings in Loughinisland and the 19 killings in the North West. Collusion was an architecture of practice that was operated across the North.

“This is a long report, which will take families days to process and come to terms with. Immediately families are shocked to read in the report that eight British state agents were involved in 27 murders and attempted murders. These agents were clearly identified as being involved in multiple murders at the earliest stages of police murder investigations. They were clearly a protected species as information about their involvement in killings was not shared with investigating officers and information regarding their involvement was routinely destroyed.

Paul Conlon, son of Harry Conlon added, “this report contains devasting details regarding the killing of our father. My mother sat and listened to the Police Ombudsman describe how a suspect in the murder of my father whom we believe to be an RUC agent, was incredibly never arrested despite wearing a coat which contained gun residue and blood which was examined in relation to the tragic killing of Aidan Wallace, but was not examined against the blood of my father. This is just one startling and devastating finding among many others.”

Siobhán Clinton, daughter of Theresa Clinton said, “it is clear in reading this report that there were systemic and deliberate practices of collusion in the killing of my mother. There were multiple threats to my father and our family home which were not passed on to my father. My mother was murdered with an RUC weapon, a weapon used in other murders. The RUC officers who were involved in “investigating” my mother’s murder refused to cooperate with the Police Ombudsman. The Police Ombudsman said a senior RUC officer decided not to warn my father and that had he been warned she finds that my mother’s murder could have been prevented.”

The Operation Achille Report contains a litany of patterns which describe a policy of collusion. These include:

This report cannot and must not be viewed in isolation. There are clear thematic links which point to how RUC Special Branch operated in all of the collusion reports released by the Police Ombudsman to date. They all detail destruction of key evidence and all record the routine destruction of intelligence records. They all record how persons were not warned of imminent threats to life.

There are practical questions which demand answers arising. Just some of them are:

Where are these RUC officers involved in routine failures that make that up the key jigsaw pieces of the policies and practices of collusion?

Who advised that Jim Clinton not be advised of the threat to his life and his family home?

It is clear that the same weapons used in killings included in this report were also used in other killings – who will now investigate these other killings?

Who will hold the pensioned former members of the RUC who refused to cooperate in these investigations to account?

Far from being a full stop, this report marks a comma in these families’ pursuit of truth and justice.

The entire report can be read here Operation-Achille-Public-Statement

A full Family Press Conference will be held tomorrow 8th February at 11am in Shaftesbury Recreation Centre, Balfour Avenue, Belfast when families will give their in-person reaction.