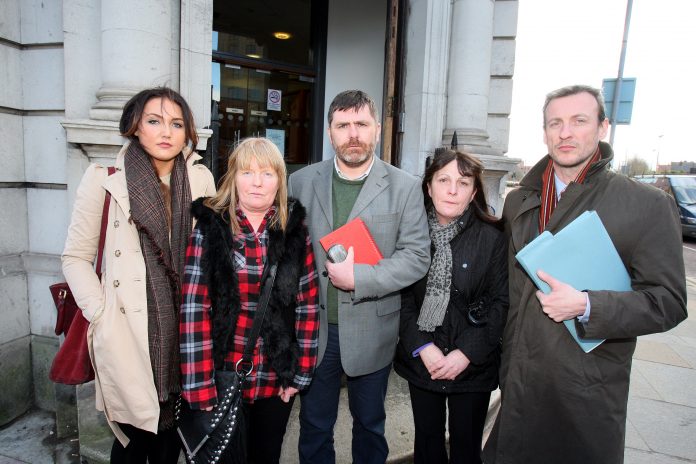 Pictured after emerging from reading the de Silva report into the murder of Pat Finucance at the Stormont Hotel Belfast. All three had been in a ‘lockdown’ room under strict conditions having been given access to the report prior to its publication. The report mentioned the circumstance relating to the murder of Gerard.
Speaking after reading the report Teresa said:
‘As people may appreciate this morning has been very emotional and difficult in again reading details about the circumstances surrounding Gerard’s murder. It brought right back to me the attack when a gang of loyalists smashed down the door of our home in the early hours of the morning and murdered Gerard who challenged them in our hallway in order to protect our young children and me. Prior to the attack the British army had been in our street.
‘However, this morning was a necessary step in our struggle for the truth.
‘The de Silva report makes it very clear that both the RUC and the British army had advance notice of a planned attack on Gerard yet decided not to take any action.
‘It also states that the same people involved in Gerard’s murder went on to murder Pat Finucane. Had they acted then the murder of Pat Finucane would have also been avoided. But that was never the intention of those who were the true authors of Gerard’s murder, Pat’s murder, and of the numerous other murders.
‘De Silva also states that the names of all 6 UDA/UFF members involved in the murder of Gerard were known to the RUC from the moment the attack was planned. And whilst none of this is new information to read it collectively is upsetting. Moreover it cries out for transparent and accountable justice again and again. This is a matter of significant public interest beyond the call of our family for justice.
‘I now call on the PSNI Chief Constable Matt Baggott to arrest immediately those members of the UDA/UFF who murdered my husband who are readily known to him.
‘His predecessor Hugh Orde, and the numerous Chief Constables of the RUC, have all sat on that evidence and effectively protected the killers. De Silva avoided that fact. Who are they continuing to protect and why? Is this really the new beginning to policing that we were all promised?
Paul Pierce said;
‘On foot of this report I will be writing to the Director of the PPS and the Chief Constable outlining the need for arrests in connection to the murder of Gerard Slane.
‘We will also be requesting all of the underlying documents concerning this report.
‘There can be no doubt that the murder of Gerard was totally preventable and yet all of the various branches of the states security forces not only deliberately failed to act, they then conspired to protect the killers, who went onto kill again. Apart from these fundamental failings questions need answering, which go to the very heart of the government, policing and security services of the time. This report fails to answer these questions for the Slane family. It raises many more.
RFJ Director Mark Thompson added;
‘The de Silva report acknowledges wrongdoing and illegal activity yet consistently fails to address the issues of responsibility, accountability and culpability.
‘Rather de Silva seeks to exonerate senior military and political figures contrary to the evidence that he himself provides. This is unacceptable to any observer of the stated facts. In our view the de Silva report makes the case for an inquiry all the more necessary.
‘Further de Silva states that it would be unfair to blame the head of the Force Research Unit (FRU) Brigadier Gordon Kerr OBE.
‘Many will feel that de Silva was a good choice by Cameron. Like Kerr, who from behind a screen in a Belfast court using the pseudonym of Colonel ‘J’, gave mitigating evidence on behalf of Brian Nelson falsely stating that he saved countless lives, de Silva mitigates the case on behalf of the British government and senior military in London.
‘That 85 percent of all UDA/UFF intelligence for assassinations was provided by the British government trough its intelligence services and RUC Special Branch tells the true story and demands that there must equally be an independent judicial inquiry into the arming, controlling and directing of loyalist murder gangs. See Relatives for Justice 1995 report Collusion – Sectarian Murders in the North of Ireland published 1995.